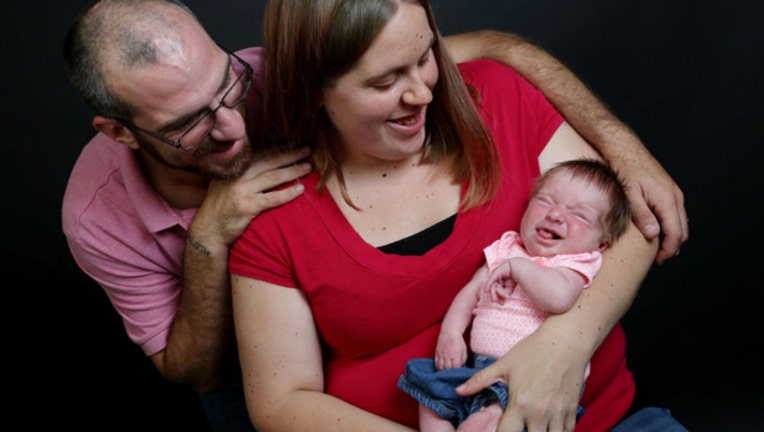 FORT MADISON, Iowa (AP) - An Illinois woman says she delivered a baby girl a few hours after she found out she was 39-weeks pregnant.

The Hawk Eye reports that Heather Columbus of Niota, Illinois, was admitted to the Fort Madison Community Hospital in Iowa on the morning of June 26 with back pain and cramps.

Columbus was given an ultrasound and a nurse informed her and her husband Michael, who had been waiting in the car, that she was 39-weeks pregnant and the back pain she had been feeling was most likely contractions.

"I was completely in shock the whole time," Columbus said. "Heck, I'm still in shock, really. I'm still trying to process it, really. I'm waiting to wake up from it."

Columbus says she still had her menstrual cycle and never felt her baby move.

That afternoon, 7-pound, 13-ounce Leona Josephine Columbus was born. She was named after both parents' grandmothers.

"We named her after the two toughest women we knew," Michael Columbus said.

Columbus said their friends, families and employers have provided nearly everything they need for their newborn daughter.

"It's been amazing. They have helped out quite a bit." Columbus said. "Everybody has."

Information from: The Hawk Eye, http://www.thehawkeye.com