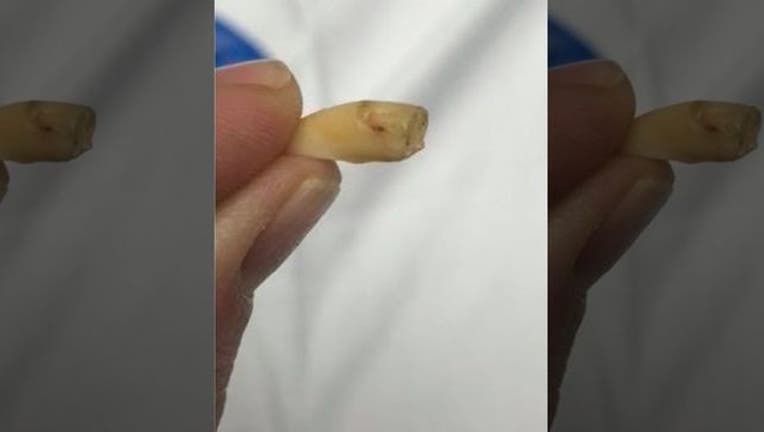 An Ohio woman claims she found a human tooth with dried blood on it in her package of Planters cashews. (Courtesy: Nickolette Botsford)

RAVENNA, Ohio (AP) - An Ohio woman says she found a tooth with dried blood on it while eating cashews.

WOIO-TV reports Nickolette Botsford said she felt something hard while eating the nuts and vomited when she saw it looked like a tooth.

The Ravenna woman said a hospital confirmed it as a human tooth spotted with dried blood. Her hospital report says she was treated for exposure to blood or bodily fluids.

>>VIDEO: Woman finds human tooth in a bag of cashews

It's unclear what product Botsford was eating and where it was purchased.

Botsford called Planters' parent company, which recently picked up the tooth for testing.

Kraft Heinz Co., based in Pittsburgh and Chicago, confirmed the item was a "foreign object" and said it's investigating its manufacturing process and suppliers.