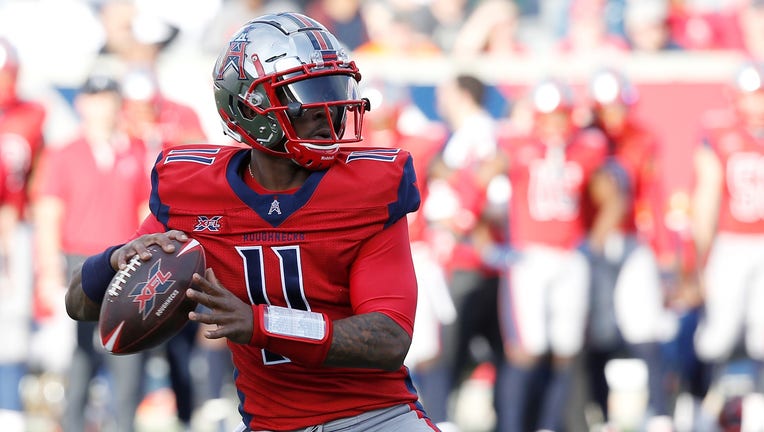 HOUSTON, TEXAS - FEBRUARY 08: P.J. Walker #11 of the Houston Roughnecks looks for a receiver against the LA Wildcats at TDECU Stadium on February 08, 2020 in Houston, Texas. (Photo by Bob Levey/Getty Images)

HOUSTON - The Houston Roughnecks took down the Los Angeles Wildcats in their first XFL matchup on Saturday with a final score of 37-17.

On the first drive of the game, Roughnecks' P.J. Walker threw to Cam Phillips for a 50-yard touchdown.

After a stall on both sides, Jordan Smallwood gave the Wildcats a 14-6 lead. The Roughnecks quickly caught back up with a 20-yard touchdown reception.

Houston hit the ground running with another touchdown after halftime, thanks to a fourth touchdown pass by P.J. Walker. The Roughnecks defense took over shortly after, trapping the Wildcats offense.

The Houston Roughnecks is one of the eight XFL teams set to play in the rebooted league beginning on Feb. 8.

June Jones is the team’s general manager and head coach. Jones was the head coach of the Atlanta Falcons and interim coach with the San Diego Chargers during his time in the NFL. He previously coached the Hamilton Tiger-Cats of the Canadian Football League.

The president of the Roughnecks is Brian Michael Cooper, who previously worked for the law firm Lewis Brisbois Bisgaard & Smith LLP as part of its entertainment, media and sports practice.

MORE: Could you make it in the XFL? Here's a look at what it takes

Here are some Roughnecks players you may know.

PHILLIP WALKER: Walker is relatively unknown in quarterback circles but beat out Connor Cook for the starting job in Houston. He was with the Indianapolis Colts from 2017 to 2019 but never appeared in a game.

SAMMIE COATES: Coates played wide receiver in the NFL from 2015 to 2018 with the Pittsburgh Steelers, Cleveland Browns, and Houston Texans. He is expected to be one of the top players in the league.

KONY EALY: Ealy played defensive end from 2014 to 2018. He appeared in one Super Bowl, with the Carolina Panthers. He also played for the New York Jets and Oakland Raiders.

Fans flocked to TDECU stadium, excited for the Roughnecks in their first game of the new season.

FOX News and FOX Sports contributed to this report.

MORE: Get the latest sports updates