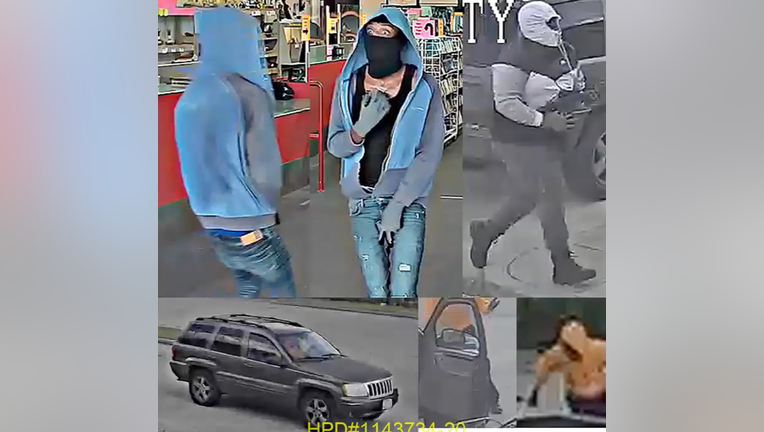 HOUSTON - The Houston Police Department is asking for the public's assistance identifying the suspects responsible for several aggravated robberies with a deadly weapon.

Houston Police say on Saturday, Aug. 29 around 4:30 p.m., three unknown males attempted to rob a pawnshop located at the 8000 block of the North Freeway, in Houston but called it off after seeing a security guard.

WATCH SURVEILLANCE FOOTAGE OF THE ATTEMPT BELOW:

One of the suspects exited the passenger door of gray Jeep Grand Cherokee and ran into the business while armed with a handgun.

The other two suspects then exited the vehicle and were about to follow. As the first suspect ran into the pawnshop, he saw a security guard inside the store and quickly turned around while signaling to the other suspects to call off the robbery.

At this time, Houston Police believe the suspects are responsible for two other pawnshop robberies.

The suspects took jewelry in each of the robberies and on the Sept. 16 robbery; the suspects also stole numerous firearms from the pawnshop.

The method of operation (MO) of the robberies is always the same, but at this time, it is unclear as to how many suspects are involved. It appears as though this could be a crew of various suspects using a different vehicle in each robbery.