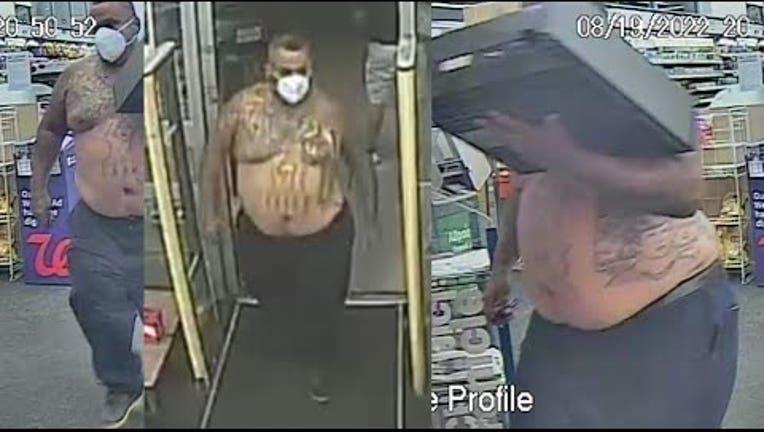 HOUSTON - Authorities need your help identifying a man linked to several robberies in the Houston area, most recently where he was seen shirtless walking out with the cash drawer.

The Houston Police Department says an unidentified man was seen on surveillance video walking into a drug store in the 2800 block of Gessner around 8:30 p.m. Friday, August 19.

The shirtless man reportedly walked up to an employee at the front counter wielding a knife and demanded money from the register. He then grabbed the till with the money and walked out of the store before taking off in a white Hyundai SUV.

MORE ON CRIME AND PUBLIC SAFETY

Back in March, officers say the unidentified man tried robbing another drug store on Hammerly. He also used a knife in the robbery but left without any money after investigators say an employee yelled for help.

The same man is linked to three other robberies, but in one instance was said to be armed with a rifle.

Officials described the robbery suspect as a heavy-set Hispanic man between 40 to 45-years-old, 6'0, and weighing 230 to 260 pounds. He also has a limp and tattoos throughout his body.

If you have any information on the suspect's identity or whereabouts, you're asked to call police or Crime Stoppers at 713-222-TIPS.