Houston Police Chief Art Acevedo has announced his resignation and is set to start a new role as Chief of Miami Police Department in a matter of weeks.

HOUSTON - Houston Police Chief Art Acevedo spoke on Monday regarding his announcement that he will be resigning his post and moving on to a new city.

During a press conference on Monday in Miami, Acevedo spoke about the opportunity.

"I wasn’t looking for this opportunity, but in my heart, I knew that my mayor Sylvester Turner, who’s a phenomenal leader in Houston—I knew his time was coming up, and I was contemplating what’s next, because politics are not in my heart, because as you know, I have no home. I piss off the left and the right to be honest with you because they’re both extreme, but service is in my heart and making a difference is in my heart."

FOX 26 obtained a letter sent by Acevedo to City of Houston employees that explained that he will be taking over as Chief of Police for the City of Miami.

Acevedo called his departure from the Houston Police Department after four and a half years "bittersweet."

In his letter, Acevedo said he and Mayor Turner decided it was a good move for him to leave in coordination with Turner's final term in office.

Acevedo says he plans to meet with members of the Houston Police Department when he returns later this week to share his final thoughts.

Acevedo finished his letter promising to fight for victims of crimes who are being negatively impacted by what he calls "misguided decisions of the Harris County judiciary and criminal justice system." 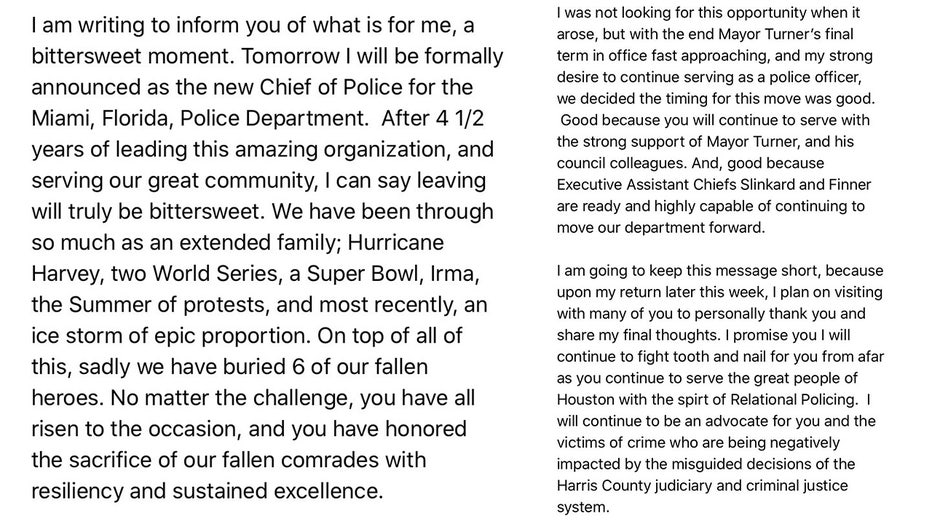 According to the Miami Herald, Acevedo is expected to be introduced during a City Hall news conference later Monday morning. He's expected to step into his new role in about six weeks. He would be Miami’s fifth chief the past decade.

Miami Mayor Francis Suarez told the Herald, "I think this is like getting the Tom Brady or the Michael Jordan of police chiefs."

Following this week's indictments of six more of his officers, Houston Police Chief Art Acevedo is responding to the allegations that his officers organized a scheme to steal overtime pay from the city of Houston.

Acevedo, a 56-year-old Cuban American, spent five years as chief in Houston, overseeing a 5,400-person force with a more than $1 billion yearly budget, after a five-year stint. The Miami police force is much smaller, with a staff of 1,400.