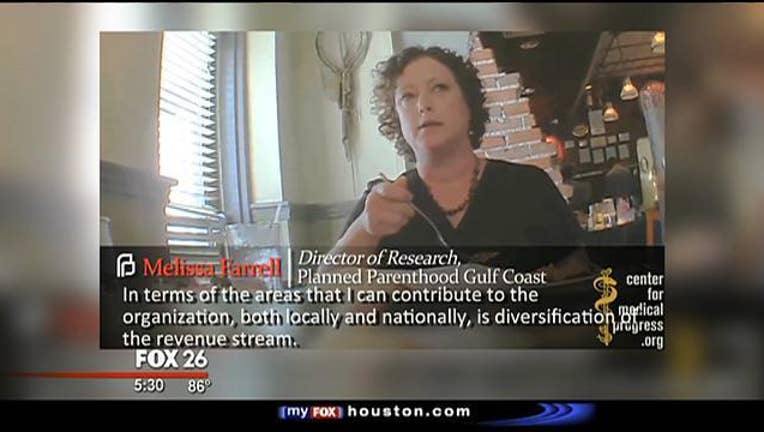 Houston's Planned Parenthood facility is the new center of scrutiny in the undercover video scandal. The Center for Medical Progress (CMP) released video Tuesday that it says was shot in Houston with Planned Parenthood Gulf Coast's Director of Research, Melissa Farrell.

The video appears to be more fuel to the allegation that Planned Parenthood profits off the sale of fetal body parts, and alters procedures to fulfill orders.

But of particular interest to Houston, we learn how important the Houston affiliate says it is to the national Planned Parenthood organization. The anti-abortion group behind the secretly recorded videos calls Planned Parenthood Gulf Coast an "abortion mega clinic headquarters."

Farrell's comments underscore the size of the Houston affiliate.

"In terms of the areas that I can contribute to the organization both locally and nationally is diversification of the revenue stream," Farrell says.

She is speaking to actors, posing as fetal tissue procurement representatives, over lunch at a restaurant. CMP claims this was recorded in April 2015.

"I think everyone realizes, especially because my department contributes so much to the bottom line of our organization here, you know, we're one of the largest affiliates.  Our research department is the largest in the United States. Larger than any of the other affiliates combined," Farrell tells the actors.

Planned Parenthood takes great exception to the release of the undercover videos, saying the group behind them is deceiving the public, and seeks to ban abortion in the United States. Planned Parenthood denies profiting off fetal tissue sales, which would be illegal under federal law. But one part of the undercover recording appears to show Farrell explaining why later term, intact fetuses, can cost researchers more.

"Sometimes the procedures are longer, so then anything that we piggy back on to that, for collection purposes obviously, would have to reflect that additional time, cost, and  administrative burden," Farrell says.

CMP also claims to have proof, in this video and others, that Planned Parenthood violates another federal law by changing the way abortions are performed in order to collect desired specimens.

"We've had studies in which the company, or in the case of an investigator, has a specific need for certain portion of the products of conception, and we bake that into our contract and our protocol that we follow this. So we deviate from our standard in order to do that."

The actors were also surprised to hear from Farrell that the doctors performing the abortion are sometimes the ones seeking the fetal specimens.

"Some of our doctors, in the past, have projects and they're collecting the specimen. So they do it in a way that they get the best specimens. So I know it can happen."

One of the actors in the recording can be heard saying," The doctors are also doing research?"

To that, Farrell nods in the affirmative, and the actor responds "'Oh, wow!'"

When an actor asks someone in the lab to show him what specimens would be available from that day, one woman responds, "We had a really long day and they're all mixed up together in a bag."

But then someone in the lab remembers twins from a woman 20 weeks pregnant.

"Oh, at 20 weeks. It was a twin. I know what you mean. 20 gestational age," the employee is heard saying off-camera.

The video gets very graphic at this point. Lab employees brought out the remains from that abortion. From what is said and what is seen, the fetuses were not intact, but specific organs were identifiable. At one point a lab worker used tweezers to picked up what appeared to be a tiny hand. It was clearly attached to a forearm, severed from the body above the elbow.

The video made public Tuesday was released last week to the Texas Attorney General's Office. Attorney General Ken Paxton says what is seen in the video is consistent with findings from the AG's  own investigation.

The final clip in the video shows the Director of Research, Farrell, talking with an unidentified Planned Parenthood Gulf Coast employee. The discussion is about how the national Planned Parenthood organization is encouraging fetal tissue procurement among its affiliates, but does not want to get "too into the mix of it."

Farrell asks the employee, "Any idea why the other affiliates in Texas think it's illegal?"

The employee thinks about the question, looking a little bewildered, and then says back to Farrell, "Really?"

Planned Parenthood Gulf Coast told Fox26 July 23rd, that the last time the facility gathered fetal tissue for research was for a study in 2011.  Despite what appears to be contradicting comments revealed in the video, PPGC said Tuesday it stood by the statement.

In response to the video, Planned Parenthood Gulf Coast released this statement, shown here in its entirety.

Regarding the release of highly-edited video footage taken inside a Houston Planned Parenthood building and clinical area.

"Extremists who oppose Planned Parenthood's mission and services are making outrageous and completely false claims. They are engaged in a fraud, and other claims they've made have been discredited and disproven.

"The footage released today doesn't show Planned Parenthood staff engaged in any wrongdoing or agreeing to violate any legal or medical standards. Instead, the latest tape shows an extremely offensive intrusion and lack of respect for women, with footage of medical tissue in a lab. These extremists show a total lack of compassion and dignity for women's most personal medical decisions.

"The video released today will be difficult for many people to see. Medical procedures and medical research are often difficult to watch. The video shows a Planned Parenthood staff member with an actor posing as a medical researcher handling fetal tissue in a lab. It is standard medical practice to review tissue to ensure the health and safety of patients, and this tissue was being examined and handled under the false pretense of a standard laboratory site visit for people purportedly conducting qualified medical research.

"The latest tape has at least 20 substantial and unexplained edits. Previous tapes released by this extremist group were heavily edited in order to distort what the people on the tapes actually said. These videos are intended to shock and deceive the public. For example, one video was edited to make it look like a doctor said she would "sell" fetal tissue for a profit -- when in fact she said the exact opposite, 10 separate times, and nearly all instances were edited out of the tape.

"The group behind these videos has close ties with organizations and individuals who have firebombed abortion clinics and threatened the physical safety of doctors who provide abortion. The real agenda of these attacks has become totally clear: to ban abortion and limit women's access to reproductive health care at Planned Parenthood. The vast majority of the public rejects this extreme political agenda and rejects the fraudulent campaign behind it."