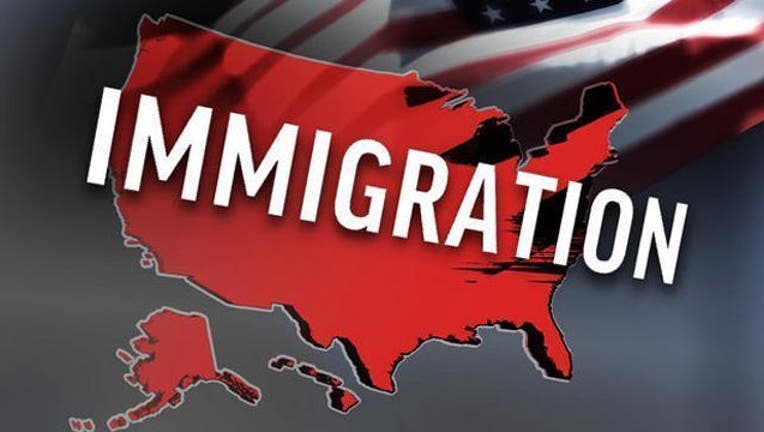 WASHINGTON (AP) -- Warning of threats to public safety and national security, the Republican-led House on Thursday approved two bills to crack down on illegal immigration, a key priority for President Donald Trump.

One bill would strip federal dollars from self-proclaimed "sanctuary" cities that shield residents from federal immigration authorities, while a separate measure would stiffen punishments for people who re-enter the U.S. illegally.

Trump often railed against illegal immigration during his presidential campaign, and his support for tougher immigration policies is crucial to his voting base. Trump met at the White House on Wednesday with more than a dozen people whose family members were killed by people in the country illegally, and Attorney General Jeff Sessions met with the families Thursday.

One of the bills, known as "Kate's Law," would impose harsher prison sentences on deportees who re-enter the United States. The bill is named after 32-year old Kathryn Steinle, who was shot and killed in San Francisco in 2015 by a man who was in the country illegally. Juan Francisco Lopez-Sanchez, who pleaded not guilty to the crime, had been released by sheriff's officials months earlier despite a request by immigration officials to keep him behind bars.

The second bill would bar states and localities that refuse to cooperate with immigration authorities from receiving certain Justice Department and Homeland Security grants, including some related to law enforcement and terrorism.

Rep. Bob Goodlatte, R-Va., chairman of the House Judiciary Committee, said the two bills would help "avoid the kind of tragic circumstances that have totally involved the lives of the people who were at the White House ... speaking up for their loved ones." The sanctuary measure follows "a simple principle that if you're going to receive taxpayer dollars from the federal government to keep people safe, that you've got to follow the law and keep them safe," Goodlatte said. Democrats said the bills were feel-good measures intended to make lawmakers look tough on crime.

She and other Democrats said the sanctuary measure was "about telling people how to police their cities" and telling local officials that "we in Washington, D.C., know better than you do."

At a news conference at the Capitol with House Speaker Paul Ryan, Kelly said his agency "will enforce the laws that are passed by Congress," adding, "I am offended when members of this institution put pressure and often threaten me and my officers to ignore the laws they make."

A spokesman said later that Kelly "will continue to push back against any attempt -- pressure, threat or otherwise -- to ignore the enforcement of immigration law."

"Enforcement is not selective, occasional or arbitrary, it's the law," spokesman David Lapan said.

The Justice Department's inspector general has identified California and major cities such as Chicago, New York and Philadelphia as locales with barriers to information-sharing among local police and immigration officials. The Trump administration warned nine jurisdictions in late April that they could lose coveted law enforcement grant money unless they document cooperation.

Sessions said Steinle "would still be alive today if only the city of San Francisco had put the public's safety first. How many more Americans must die before we put an end to this madness?"

Rep. Luis Gutierrez, D-Ill., said "Kate's Law" would not have had an impact on the Steinle case, noting that Steinle was killed in July 2015 by an immigrant who had been mistakenly released by the federal Bureau of Prisons.

The proposed bill "would not have kept Kate Steinle's killer off the streets," Gutierrez said. "Instead, we are voting on a bill to put other people -- in different circumstances -- in jail for longer periods of time. It is a bait-and-switch strategy: Use a horrible tragedy to sell a policy that would not have prevented that death, so that you put more immigrants in jail for longer periods of time."