Reeling from massive cutbacks in volunteers during the COVID-19 pandemic, and grappling with high construction costs, Habitat for Humanity leaders would be the first to admit they’re struggling.

The past year has felt like one punch after the other, they say. First hit: Habitat's local affiliates had to limit volunteers over virus concerns, forcing them to fork over more money to hire contractors. Second hit: Revenue was dented by temporary closures of ReStores, the reuse stores operated by local Habitat organizations. The third: Construction delays caused by pandemic-induced kinks in the supply chain, which make affiliates wait longer for supplies.

What could have been the knockout blow was the spike in construction costs. Lumber prices, according to the National Association of Home Builders, increased by more than 300% since April 2020. Demand for new homes, as well as demand for supplies for renovation projects and other factors, also kept costs high, experts say. Prices have come down in recent weeks, but they are still significantly higher than before the pandemic. 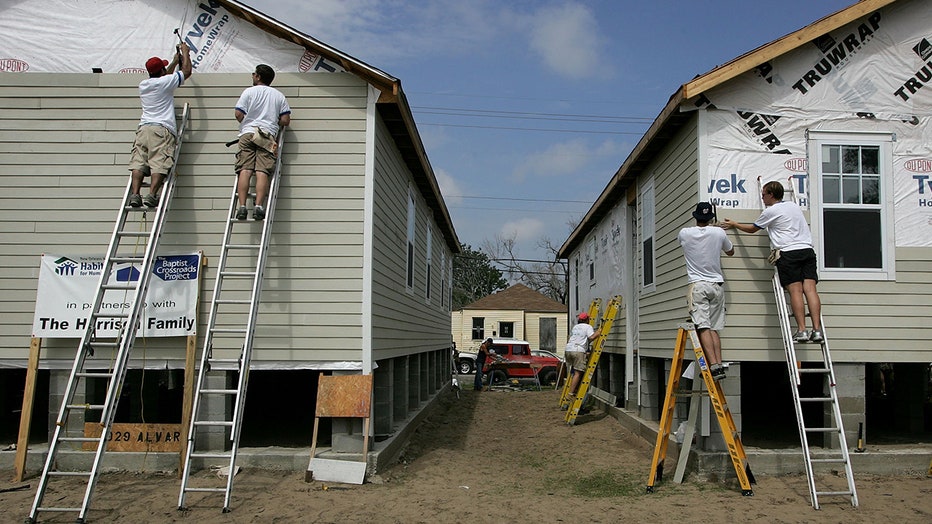 Morgan Pfaff, the executive director of Habitat for Humanity of Wisconsin River Area, which operates in rural Baraboo, Wisconsin, said the group had to cancel the second house it was going to build this year because it just can't afford it. The one house they are building is costing more because it doesn't have enough volunteers. "It’s going to be, at least, an additional $13,000 of contracted labor that we hadn’t budgeted for," Pfaff said. "Then you add in the cost of materials, and it’s really upside down."

Faced with challenges on all sides, Habitat's network of independent, locally run affiliates are trying to cope with increased costs by taking out loans, increasing fundraising and using alternative construction materials, among other things. Some affiliates are using materials local stores helped them stockpile before the price hikes went into effect. Now, in the midst of the surges, officials say donors are also stepping up.

In each of the past three years, the nonprofit has built an average of 3,000 new homes in the U.S. It continues to be one of the top affordable homebuilders in the country, despite a 4% drop so far this year compared to 2019, according to Adrienne Goolsby, senior vice president of U.S. and Canada at Habitat for Humanity International. However, experts say its work — and the work of other housing nonprofits — can't solve the shortage of nearly 7 million affordable homes in America alone.

Habitat received about $1.5 billion in contributions and other in-kind gifts throughout its network, according to the organization’s annual report for fiscal year 2019, which shows the latest figures without the impact of the pandemic. Those gifts, coupled with federal grants, help affiliates subsidize mortgages for Habitat homes, which families build alongside volunteers and pay off through a no-interest mortgage that cannot exceed 30% of the homeowners' monthly income.

"One of the challenges facing Habitat is that a lot of affiliates are working with families who were previously approved for a finance package that did not account for these increased costs," said Nancy Lee, the executive director of Habitat for Humanity South Carolina, which oversees 29 local affiliates in the state.

"As the cost to build increases, we’re seeing a lot of affiliates absorbing that financial burden themselves," she added. "That is not a sustainable approach, and the ramifications we’re seeing in South Carolina include affiliates having to consider either slowing down anticipated build schedules and/or finding alternative ways to overcome the price increases, if this situation persists."

Another reason Habitat homes are affordable is because the affiliates get materials for free or at a low-cost from Habitat for Humanity International’s corporate partners. But, the affiliates still have to make purchases at a market rate. Burdened by the recent cost spikes, some are now focusing more on home repairs instead of new construction, said Goolsby.

"Our affiliates are quite innovative as well, some of them are using substitute materials where it’s allowed," Goolsby said. For example, instead of using wood-based exterior sheathing for homes, some are considering a shift to rigid board insulation, which is made of foam.

Others chose not to change their building model to counteract the lumber prices and will continue to absorb the costs. One such affiliate, Tennessee’s Habitat for Humanity of Montgomery County, will begin to pass an 8% increase onto homeowners for future builds, said Rob Selkow, its executive director. Even with the hikes, he notes most of the future recipient families will fall in the same low-income bracket.

Since the Habitat affiliates operate independently, it’s unclear how many will pass more costs on to homeowners. Lee, of South Carolina, says some affiliates base a home's sale price on their total out-of-pocket expenses, which could price out some families. That’s a scenario they want to avoid, she said.

In South Carolina, affiliates are absorbing much of the extra cost through forgivable second mortgages. Those typically aren’t paid back to the affiliates unless a family moves, or sells the home they've purchased before paying off their first mortgage, according to Lee.

All of this has contributed to construction setbacks. Habitat for Humanity International, which expects high construction costs to be sustained, says it will "continue to look at how production has been affected, and identify and manage risks to affordable home construction."

Aware of the challenges, individual donors have stepped up their giving to the umbrella organization, which has been able to provide grants to struggling affiliates, Goolsby says. Some have also been getting more funding from local community foundations.

"You know what's going through my head right now? Staying alive. We’re working hard on staying alive," said Virginia Ohler, the executive director of the West Tuality Habitat for Humanity in Forest Grove, Oregon. Her affiliate has been spending more time fundraising. It has also borrowed money and stockpiled on construction materials.

"Some of our local suppliers have been extremely helpful to us, and they’ve worked with us to help mitigate costs," she said. "But, you can’t buy a year’s worth of materials ahead of time. So at some point, it’ll catch up with us."

Though there are challenges left and right, the recent decrease in lumber prices is one bright spot. Habitat for Humanity International also lifted its recommended guidance on volunteer usage earlier this month, which could soon start saving affiliates labor costs.

The increase is "really going to cost us, as a non-profit, to relook our whole portfolio and how we conduct business," he said. "With all of these increasing costs, how do we continue to maintain the same quality of service that we provide to our clients without placing ourselves in a financial hardship? Those are hard questions."