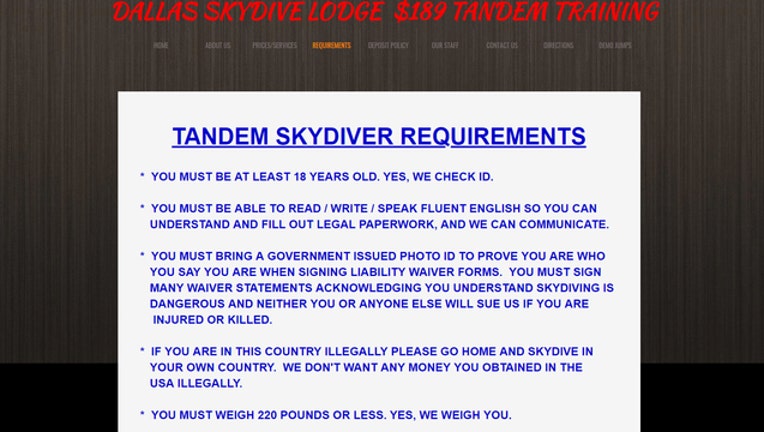 GREENVILLE, Texas - A North Texas skydiving company is defending its requirements that say skydivers must be able to speak English and cannot be in the country illegally.

Skydive Tandem Greenville, which is located in Hunt County, lists the requirements for tandem jumps on its website.

In addition to being over 18 years old and having a government-issued photo ID, the company states its customers must sign a waiver, understand that skydiving is dangerous and be able to speak English.

Critics have called that and the next requirement racist and offensive.

“If you are in this country illegally please go home and skydive in your own country. We don’t want any money you obtained in the USA illegally,” the website states.

“JUDGEMENTAL RACIST HATEFUL PEOPLE! I would NEVER spend my money on a company that is so hateful and judgemental and rude towards any human trying to give them their business because of their ignorant one track uneducated mind! Avoid at all cost!!!” added Stefanie Martinez.

But owner Hank Schraeder said the English-only requirement is indeed a safety requirement. He also claims race is not a factor in his policies.

“We also ‘discriminate’ against people from Denmark, Sweden, Germany, Canada, France, etc. that can't speak English. The ‘racist’ card is always the first liberals pull when the question of illegal presence in this country comes up. Apply legally like my ancestors did after you go home,” Schraeder wrote on the Skydive Tandem Greenville Facebook page.

A photo of Schraeder from 2016 has also drawn criticism on social media. It shows him in front of the business holding up a sign that says, “Trump Wetback Round-Up 2016.” The caption on the photo reads, “I think I figured out a way to keep non-English speaking people from coming to the drop zone!” It has since been taken down.

Greenville is located about 60 northeast of Dallas.