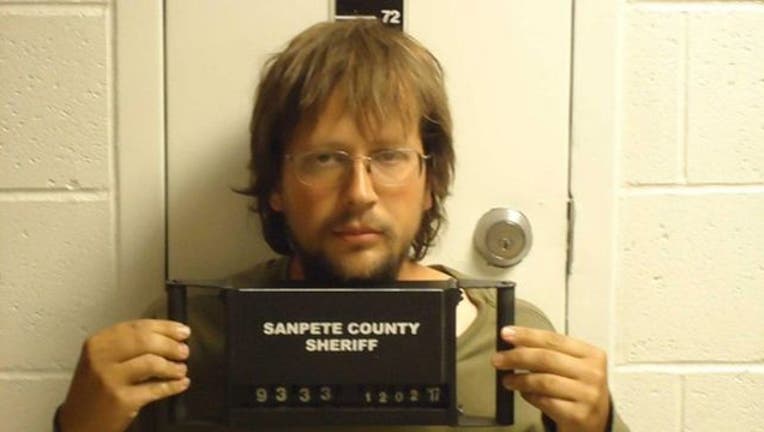 John Coltharp was arrested on Friday on suspicion of kidnapping his two daughters. (Sanpete County Jail )

(FOX NEWS) - Two Utah girls were found safe Monday three months after they were allegedly kidnapped by their "doomsday prepper" dad -- who reportedly betrothed his daughters to a cult leader.

An Amber Alert was canceled Monday when authorities found Hattie Briella Coltharp, 4, and Dinah Elizabeth Coltharp, 8, outside Lund, FOX13 Salt Lake City reported. Authorities initiated the alert when they received a tip and arrested Samuel Warren Shaffer, 34, who calls himself the prophet of a polygamous sect named "Knights of the Crystal Blade." The children's father, John Coltharp, is a member of the sect.

Authorities raided a suspected sect compound and located the girls and their brothers.

Monday's discovery came days after Coltharp, 33, was arrested on suspicion of kidnapping. He refused to tell authorities the girls' location, even after they offered to release him on his own recognizance if he provided the information. He's now being held on $50,000 bail and no formal charges have been filed.

Micha Soble, the girls’ mom, told FOX13 she hadn’t seen her children since Sept. 10, when their father took them and disappeared with his grandparents. Soble’s attorney also told the Salt Lake Tribune her ex-husband “stated, according to [Soble’s] understanding, that he would rather see the kids dead than with the police.”

"They are with a man that calls himself Samuel 'The Seer,'" Soble said. "His name is Samuel Warren Shaffer and he believes he holds the keys of this dispensation and he has been many people throughout the history of time and that he has been reincarnated. They are following his prophecies and I believe he is with them and helping hide the children."

Family members also told the Denver Post they believe Coltharp had given their daughters to Shaffer for marriage.

Coltharp is said to be a survivalist and “doomsday prepper” who doesn't believe in modern medicine, according to court documents. His ex-wife also said Coltharp carried a pistol and threatened to send a police officer or childcare worker “to the next life” if they took away his children.