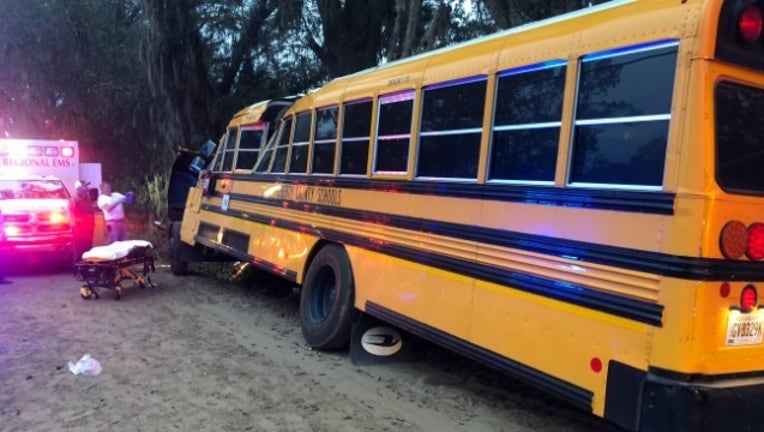 HINESVILLE, Ga. (AP) - A school bus driver on her early pick-up route lost control on a dirt road and smashed into a tree Tuesday, killing a 5-year-old girl and sending 21 other children to hospitals.

The crash happened on a foggy morning just before 7 a.m. as the bus was gathering Taylors Creek Elementary School students in tiny Gum Branch, a city of fewer than 300 residents that backs onto a large military community about 50 miles southwest of Savannah.

It's too soon for investigators to know if the 62-year-old driver, who also was hospitalized, will face any charges, said Lt. Thornell King of the Georgia State Patrol. King said video from a security camera on the bus showed her struggling with the gear shift right before the crash.

"The driver, she made a right-hand turn and she hit a bump," probably a roadside ditch, King said. "After she hit the bump, you can clearly see on the video her struggling with the gear shift as if to put the bus in park or trying to slow it down."

King said it did not appear on the video that the driver was accelerating at high speed, and he said it was possible that "something malfunctioned" on the bus.

King identified the girl killed in the crash as 5-year-old Cambria Shuman. He said she had been sitting in one of the front-row passenger seats. The bus had no seat belts.

Clay Rowe was driving on Highway 196, which runs parallel to the road where the crash happened, early Tuesday when he saw flashing lights through the trees. He turned onto the dirt road and saw the bus with its passenger-side wheels in a ditch and its front end smashed against a tree. He saw crying children who had escaped through the bus's rear emergency exit.

"They were distraught," Rowe said. "They weren't hurt bad, but a couple of them were bleeding from nicks and cuts."

Rowe said he called 911, then had the children gather at his pickup truck. He knelt and prayed with them. Then one girl told him: "My sister's dead."

Rowe said he went back to the bus, hoping the girl was wrong. He said he found one child still inside, and it was obvious she wasn't alive. The driver was moaning in her seat, he said, trapped by twisted metal and debris.

By Tuesday evening, a teddy bear and two small flower arrangements had been left at the crash scene. The impact left deep gouges in the trunk of a tree, where a strip of metal was stuck in the wood and shards of glass littered the ground.

Kayla Reinert said her two children were waiting for the bus, which crashed before reaching their stop. She found them another ride to school and didn't learn of the crash until after she got home.

"It's just tragic," Reinert said. "It really hits close. My children could easily have been on that bus too."

The impact caused the bus roof to cave in on the young passengers, the State Patrol said in a news release. All of the other children on board were taken to nearby hospitals to be treated for "bumps and scrapes and lacerations," said Mike Hodges, the Liberty County public safety director.

The impact trapped the driver in the crushed front section of the bus. She was taken to a Savannah hospital after being freed by emergency responders. Her condition wasn't known immediately, but King said she had been conscious and talking with school officials.

Hodges confirmed roads had been foggy in the area early Tuesday. But authorities said it was too early to know if weather played a role in the crash.

Debra Wells said her two grandchildren live on the same bus route, though she drives them to school. She saw the flashing lights of police cars and dozens of emergency responders as she was forced to take a detour around the crash site Tuesday morning.

Wells said she was grateful the toll wasn't much worse. She had been discussing the crash all day with customers at the convenience store where she works.

"Everybody is very sad for the family," Wells said.