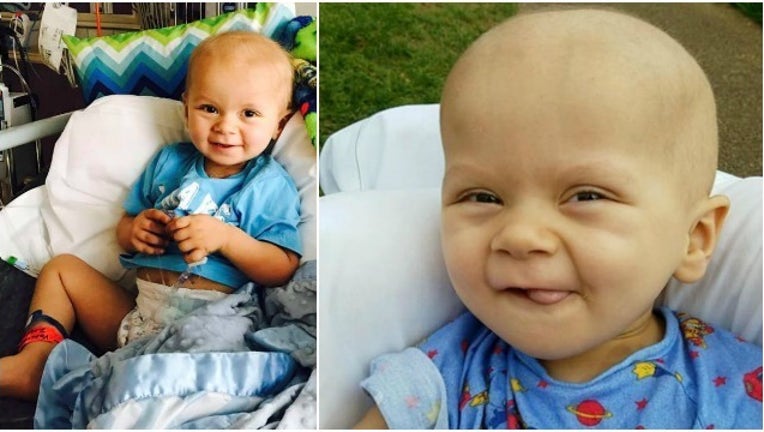 ATLANTA - A southwest Georgia boy fighting a rare form of pediatric cancer is scheduled to head home from the hospital, just in time for his 2nd birthday.

Evan Vickers has been fighting for his life since March 17, 2015, the day he was born. He came into the world with multiple heart defects and underwent open-heart surgery at just 6-days-old. It was a life-saving procedure, but the surgery left him with brain damage, physical and developmental delays and feeding difficulties.

Then, six months after his 1st birthday, Evan was diagnosed with neuroblastoma.

"His tumor was removed two days before his 18-month birthday," mother Brittany Vickers said. "He was diagnosed with cancer and in remission just seven weeks later."

Evan's mother said the quick recovery was amazing, but this January, the cancer relapsed, and he's been in and out of the hospital ever since.

"The tumor came back fast and furious," Brittany said. "This time it was occupying 50 to 60 percent of his abdominal area and was classified as Stage 4, high risk"

Last week, Evan was hospitalized again due to an infection, which doctors were unable to get rid of. He had to have his port removed and was scheduled to have a PIC line put in Friday morning.

"It breaks my heart that he will start the morning of his 2nd birthday on an operating table," Brittany said on Thursday.

According to his mom, Evan is supposed to go home shortly after surgery Friday morning.

"After 10 long days inpatient, Evan can come home for 48 hours and attend his birthday party before returning to Atlanta on Sunday night for chemo next week," Brittany said. "It's not much downtime, but we're grateful he's able to come home!"

The Vickerses are from Leary, Georgia, which is a small town about an hour from Albany, and four hours from Atlanta. Brittany told FOX 5 they've spent more time in Atlanta this year than they have in their own home.

If you would like to send Evan a birthday card, please send mail to:

Evan will begin his fourth round of chemotherapy Monday morning at the Aflac Cancer Center of Children’s Healthcare of Atlanta. His family is asking that you keep him in your prayers.

"He has a long road ahead with battles that no child should ever have to fight, but he's tough," Brittany said. "He's fought every single day of his life with a smile on his face."

Loved ones have set up a GoFundMe account to help the family with Evan's medical expenses. If you would like to donate, click here. You can also learn more about Evan's battle against cancer on Facebook and on his CaringBridge site.