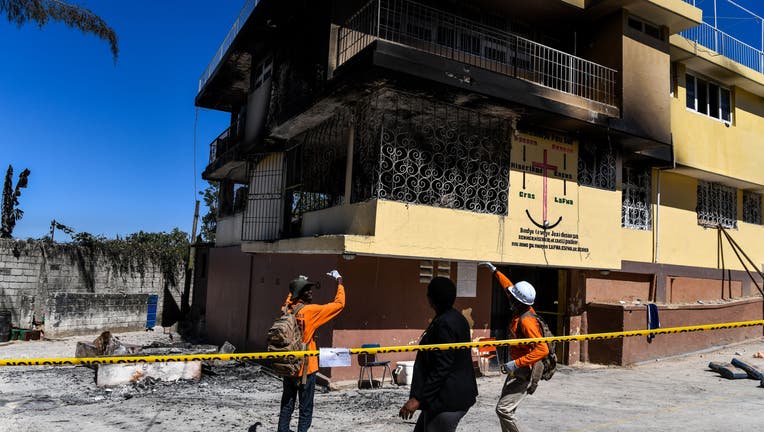 Firefighters speak to a local judge (C) as they point at the Orphanage of the Church of Bible Understanding where a fire broke out the previous night in the Kenscoff area outside of Port-au-Prince February 14, 2020. - The fire killed 15 children. (Ph

PORT-AU-PRINCE, Haiti - Relatives of 15 children killed in a fire at an orphanage continued to show up outside the burned-out compound Saturday seeking news about their missing kids.

The gates to the two-story, walled compound were shut and guards shooed away visitors and journalists asking for information and access to the building.

Eighty-year-old Simon Comie came looking for his 4-year-old granddaughter and was told to return Tuesday because officials had no information on the girl.

" I came to find out if my granddaughter, Louisimon, is here," he said. "If she died, God took her away."

The home, located in the hills above the capital, is run by the Pennsylvania-based Church of Bible Understanding, which also operates another orphanage nearby. The nonprofit group runs antique stores in New York and Los Angeles called Olde Good Things to fund its operations in Haiti.

About half of the kids who died were babies or toddlers and the others were about 10 or 11 years old, workers at the home said. They said the blaze started around 9 p.m. Thursday and it took firefighters about 90 minutes to arrive.

Haitian authorities went to the group's second orphanage Friday and removed about two dozen children, but did not close the facility until alternative quarters could be found for the remaining children.

"I heard the orphanage caught fire, and I don't have a radio at home, so I came this morning to get more information," said Marie-Louise Jean, who is in her 50s. She found her 11-year-old daughter Marie-France at another facility.

"I did everything to give her a good life. I am glad she is alive," the woman said.

The Associated Press previously reported on a long-standing series of problems at the two children's homes run by the Church of Bible Understanding, which is based in Scranton, Pennsylvania.

"'We are aware of the fire in the children's home in Haiti," Temi J. Sacks, a spokesman for the group, said Friday. "It would be irresponsible for us to comment until after all the facts are in."

The group lost accreditation for its homes after a series of inspections beginning in November 2012. Haitian inspectors faulted the group for overcrowding, unsanitary conditions and not having enough adequately trained staff.

AP journalists visited the homes, holding a total of 120 kids, in 2013 and found bunk beds with faded and worn mattresses crowded into dirty rooms. Sour air wafted through the bathrooms and stairwells. Rooms were dark and spartan, lacking comforts or decoration.