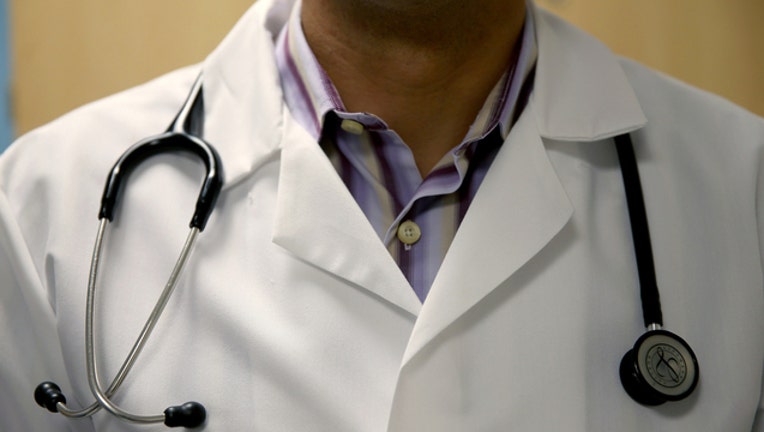 A doctor wears a stethoscope as he see a patient

THE HAGUE, Netherlands (AP) - Martijn van Halen has every right to be angry at Jan Karbaat. The Dutch fertility doctor lied to his parents and used his own sperm to inseminate Van Halen's mother.

But, somehow, the 39-year-old Dutch landscape gardener doesn't seem to harbor too much resentment.

"Of course, what this doctor did isn't great. For my parents and the parents of my siblings, it's of course terrible," Van Halen told The Associated Press on Monday. "They were lied to and it's the doctor who treated them - that's wrong. But for me, I wouldn't have been here without the donor."

The case of Dr. Karbaat, who died in 2017 at age 89, has riveted the Netherlands, due to its mix of unethical medical behavior, privacy issues, DNA testing, legal wrangling and the rights of children to know who their parents are.

Last week, DNA results confirmed that Karbaat had fathered at least 49 children. The real number could be higher and spread beyond the Netherlands, even as far as the United States.

Ties van der Meer of the Dutch Donor Child Foundation, which supports such children, says Karbaat could have fathered many more. He said Monday that three more people contacted him over the weekend because they suspect they may also have been conceived using Karbatt's sperm.

Before learning about Karbaat, Van Halen already knew he had a large extended family, having checked an American DNA database for matches two years ago after learning from the man who raised him - who he thought was his father - that he was a donor child.

A few months later, a Dutch agency made a DNA profile of one of Karbaat's sons. In February, Rotterdam District Court overruled the privacy objections of Karbaat's widow and ordered the profile to be made available to parents and children who suspected that they may be linked to Karbaat.

As far as Van Halen now knows, "it's 36 sisters and 12 brothers and there are still a few that want to remain anonymous."

Most of the Karbaat children are adults now and many have children of their own. Van Halen says it's striking how alike the half-siblings are.

"They're strangers, but you see ... so many resemblances. So we've got the same nose, eyes, teeth," he said. "That's really strange. It felt directly as if we already knew each other a long time."

Van Halen said the doctor had spoken in interviews years ago of taking his "product" to the United States. It is unclear whether Karbaat was referring to his own sperm or that of other donors and it was not immediately clear where in the U.S. he visited.

Karbaat's fertility clinic in the town of Barendrecht, a suburb of Rotterdam, was ordered closed in 2009 by a Dutch government health care agency due to poor administration and record keeping. A phone number and email address listed online for the clinic no longer work.

Publicity surrounding the case means that the extended family may grow even larger as more people seek to check their DNA against Karbaat's.

Meanwhile, dozens of people who now know who their biological father is are coming to terms with the news.

"We are all happy with the clarity and the information we now have, so we can get on with our lives," said Joey Hoofdman, 32, one of the people fathered by Karbaat.

"It is a wave of emotions. We are all happy we have met each other, but because there are so many, it is complicated," he added.

Hoofdman said he will now seek compensation. He said his mother went to the clinic for a fertility treatment with the sperm of her partner, the man who raised Hoofdman as his son.

Until 2004, people in the Netherlands who donated sperm or eggs could do so anonymously.

Van der Meer said Karbaat appears to have been able to father so many children in part because of the culture of silence that prevailed around sperm and egg donations in the 1970s and '80s, when doctors advised parents not to tell children.

"If something is kept secret from all sides, then the only person with all the information - and that is the doctor - has totally free rein," he said.

The Dutch branch of child rights group Defense for Children, which supported the legal battle, welcomed the clarity that DNA has brought and said it should be a first step toward allowing all children of anonymous donors to seek out and find their heritage.

"The Karbaat case is the first enormous breakthrough," said Iara de Witte, an adviser to the rights group.

Thanks to the DNA tests, Van Halen has found out that Karbaat's family is healthy and lead long lives. But he is aware of the potential downsides.

"I've got two children. All ... my half siblings, my brothers and sisters, (have) got children," he said. "I could have married a sister, but luckily that didn't happen."