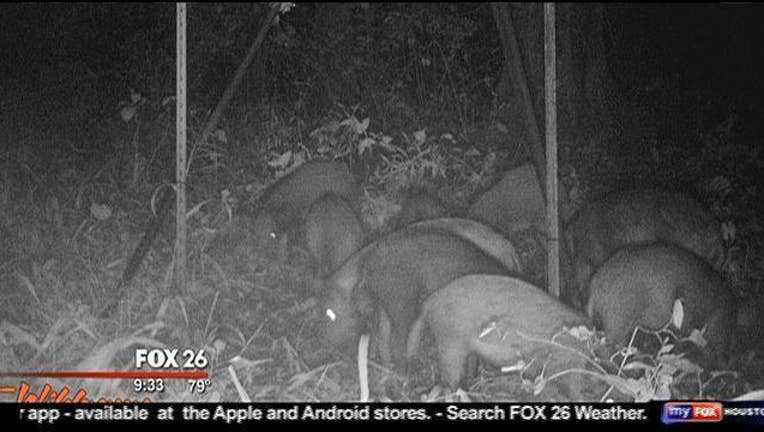 MYFOXHOUSTON - Coach Chad Taylor is getting his Liberty High Panthers ready to play Bobcats and Bulldogs this season -- certainly not hogs.

"I need my hogs up front to be as nasty as these hogs were," he said.

Yeah, Hogs -- definitely not on the schedule.  But feral hogs have been on their football field digging huge holes.

“We've had some hog issues.  Holes 5 foot wide, a foot and a half deep all throughout the field,” said Taylor.

The coaches fixed the holes by filling them in with dirt.   Then they called Steven Horelica, who’s a 5th grade teacher by day and a hog hunter extraordinaire by night.

“It's just amazing the amount of damage they can do in just a few hours,” said Horelica.

The owner of "Deep South Trapping" entices the animals with food in a forest near the football field. Then builds a trap around the food equipped with a live camera and eventually, when all the hogs are inside.

“Bam going to drop the hammer on them,” said Taylor.  “Once we decide to shut the trap all we have to do is text the code to the gate and it shuts immediately,” said Horelica.

“It is pretty high tech makes trapping pretty easy you can sit at home in your recliner watching TV and trapping hogs," he said with a smile.

So far they've counted up to 18 hogs here.  While they're typically not dangerous to humans, it's a different story once their trapped.

“But definitely in a trap they are dangerous, they're going to try and bite you or ram you or cut you with their tusk,” said Horelica.

Once the hogs are caught they’ll be sent to the slaughter.  Horelica is not charging the school district for his services.