Eli Manning, quarterback for the New York Giants, is set to announce his retirement on Friday.

The New York Giants have announced that quarterback Eli Manning is retiring. Manning will announce his retirement on Friday.

"For 16 seasons, Eli Manning defined what it is to be a New York Giant both on and off the field," said John Mara, the Giants' president and chief executive officer. "Eli is our only two-time Super Bowl MVP and one of the very best players in our franchise's history. He represented our franchise as a consummate professional with dignity and accountability. It meant something to Eli to be the Giants quarterback, and it meant even more to us. We are beyond grateful for his contributions to our organization and look forward to celebrating his induction into the Giants Ring of Honor in the near future."

Manning's first 183 regular-season and 11 postseason starts were for Tom Coughlin, the Giants' head coach from 2004-15.

Manning most recently won the 2020 Athletes in Action/Bart Starr Award. The award is given to an NFL player who best exemplifies outstanding character and leadership in the home, on the field, and in the community. The league’s players decided the winner from 10 finalists.

Manning is one of the most accomplished players in the 95 seasons of Giants football. He is the only player in franchise history to suit up for 16 seasons and his 236 regular-season games (234 starts) and 248 total games are both Giants' records.

"I can't tell you what that means to a coach, to be able to prepare every week knowing your starter is going to be there," Coughlin said. "It's almost impossible today to be able to do that. Some teams are fortunate. Many teams it doesn't happen to. You get a guy nicked, you get him hurt. I remember once he was hurt with a shoulder. He didn't practice all week. We didn't know if he'd be alright. He started and played the whole game and played well. It meant a great deal to us to be able to prepare knowing he was going to be on the field and be the starting quarterback for all of those games." 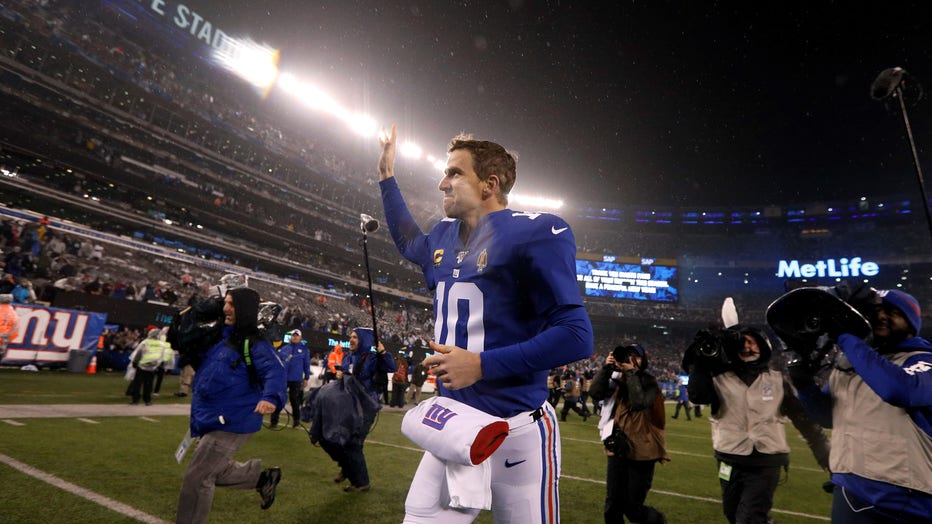 EAST RUTHERFORD, NEW JERSEY - DECEMBER 29: (NEW YORK DAILIES OUT) Eli Manning #10 of the New York Giants runs off the field after a game against the Philadelphia Eagles at MetLife Stadium on December 29, 2019 in East Rutherford, New Jersey. The Eagle

Manning has worked with many organizations off the field. He and his family built “The Eli Manning Children’s Clinics” at the Blair E. Batson Hospital for Children in Jackson, Mississippi. In addition, he supports numerous charities including Tackle Kids Cancer Initiative, Hackensack University Medical Center, Children’s of Mississippi Capital Campaign, March of Dimes, New York March for Babies, Guiding Eyes for the Blind, American Red Cross, Scholastic’s Classroom Care Program and the PeyBack Foundation.