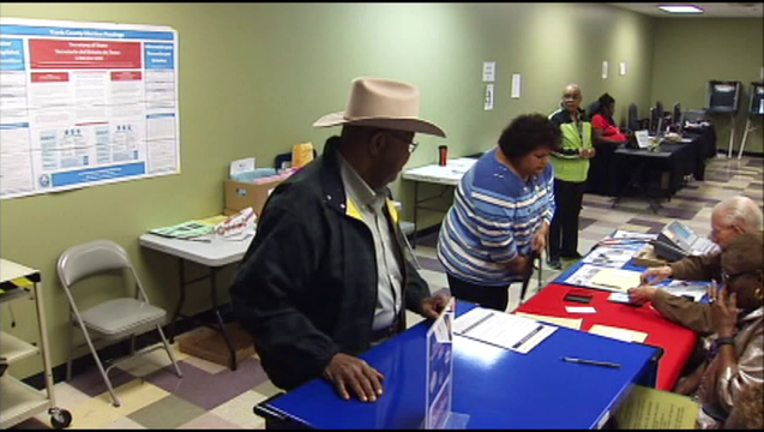 Rejected voter registrations, malfunctioning voting machines, confusion among election workers. These problems and more have surfaced during early voting ahead of Tuesday's midterm elections. A rundown of voting problems so far around the country:

- Some Texas voters reported that balloting machines flipped their straight-ticket selections to the other party in key races during early voting. State officials said the problem was connected to Hart eSlate voting machines, which are used in about 30 percent of counties statewide. They said problems can occur when voters complete and submit ballots too quickly. The Texas machines do not provide receipts or other forms of paper trail, but voters see a screen that shows their choices before final submission and can make changes then. Political activist Leah McElrath snapped a photo of the error and posted it to Twitter after seeing on social media that others were having similar problems: "The main thing isn't why it's happening - if it's malice, malfunctioning or poor design," she said. "It just needs to stop."

- A handful of voters in Guilford County, North Carolina, reported their ballot decisions on touchscreen voting machines were recorded incorrectly during early voting, which began Oct. 17. County elections director Charlie Collicutt attributed the issue to old technology (the voting machines were bought in 2006) and encouraged all voters to double check their choices before they submit their ballots. Election experts have warned that aging voting equipment can result in failures and other issues.

- When voters in Dodge City, Kansas, head to their polling place this year, they will have to leave the city. Election officials have moved the lone polling place outside city limits, citing construction at the previous polling site. Voting rights groups already were upset that there was only one polling place for the city's 13,000 registered voters. They also worry about low turnout among Hispanics, who represent 60 percent of Dodge City's population.

- Some voters in Barton County, Kansas, will have to travel 18 miles to get to their nearest polling site after officials cut the number of voting locations from 23 during the state primary to 11 for Tuesday's general election. County Clerk Donna Zimmerman says the polling places were consolidated to save money.

- After facing national criticism, election officials in a majority black county in rural south Georgia reversed course and withdrew a plan to eliminate seven of the county's nine voting locations. An independent consultant had recommended the consolidations in Randolph County, noting the seven polling places did not comply with the Americans with Disabilities Act. The consultant was later fired. County officials say they lack the money to make the necessary changes to comply with the ADA.

- A federal judge has ruled that Georgia election officials must provide time for voters to fix their absentee ballots when the signature on the ballot does not match the one on file with their local election office. The ACLU and other civil rights group had sued the state after reports that a suburban Atlanta county had rejected a high rate of absentee ballots compared to other large counties in the metro area. Under the judge's order, voters would have almost a week to verify their identity and have their ballot counted.

- Some 10,000 voters received mailers from the Missouri Republican Party with incorrect information about when their absentee ballots are due. GOP officials blamed the issue on a miscommunication between the party and the vendor that printed the postcards. Absentee ballots are due on Election Day.

- In Montana, an undetermined number of voters received a mailer from the Republican National Committee that included an error about the state's absentee ballot deadline. The RNC plans to send new mailers and call voters to provide clarification that ballots must be received by 8 p.m. on Election Day.

- A judge has ordered Tennessee's largest county to allow people with incomplete voter registration applications to fix any problems and vote on Election Day. Groups including the Tennessee Black Voter Project had submitted more than 36,000 registrations to the commission, but officials said about 55 percent were invalid because they were incomplete, were duplicates from previously registered voters or had come from convicted felons.

- In Georgia, some 53,000 voter registration applications - the vast majority of which were submitted by black residents - are considered pending by the secretary of state's office because they ran afoul of the state's "exact match" law. The law requires information on the forms to precisely match records with either the Georgia Department of Driver Services or the Social Security Administration. Those flagged on the list, however, can still vote if they bring a valid photo ID that substantially matches the information on file. A photo ID is required of all voters in Georgia.

- In St. Louis, Missouri, 600 people who recently registered to vote were mistakenly sent letters telling them they were ineligible. Election director Rick Stream said the error was the result of confusion by election workers processing forms that arrived after the state's Oct. 10 deadline. Forms postmarked or signed by Oct. 10 should have counted, regardless of when they arrived. Officials say they are working to notify those affected.

- Voters in Arkansas will have to show a photo ID after the Arkansas Supreme Court on Oct. 11 upheld a state law approved last year. Voters who come to the polls without a photo ID will be allowed to cast a provisional ballot if the voter signs a sworn affidavit or returns to the election office by noon the following Monday with his or her ID. The provisional ballot will be counted as long as the county election commission doesn't invalidate it on other grounds.

- Voters in Missouri who do not bring a valid photo ID to the polls will not have to sign a sworn statement after a state judge set aside that requirement. The Oct. 9 ruling by Judge Richard Callahan also prevents the state from advertising that a photo ID is required to vote. Instead, voters who do not have a proper photo ID can cast a regular ballot if they show some other form of identification, such as a student ID card, utility bill, bank statement or paycheck that contains a home address.

- Voters in North Dakota will be required to provide a photo ID with a street address in order to vote on Election Day. Members of the Turtle Mountain Band of Chippewa Indians had sued over the requirement, arguing that street addresses aren't always assigned on reservations and the requirements discriminate against Native Americans. Earlier this year, a federal judge issued an injunction that would have allowed voters to use identification with a post office box, but that was later blocked on appeal. The Spirit Lake Sioux tribe has since filed another lawsuit challenging the street address requirement.

- A panel of federal judges has ruled that people in Ohio who had been removed from the list of registered voters for not casting ballots over a six-year period will be able to participate in Tuesday's election. A divided 6th U.S. Circuit Court of Appeals panel granted an emergency motion sought by voting-rights groups.

- Voters who recently moved to New Hampshire will have to submit additional documentation after the state Supreme Court overturned a lower court's ruling that had placed the requirement on hold. The law requires voters who had moved to the state within 30 days of an election to provide proof they intend to stay.

HOW TO GET HELP

Voters who encounter problems at the polls can seek assistance from the U.S. Department of Justice at (800) 253-3931 or the nonpartisan Election Protection coalition at (866) OUR-VOTE.