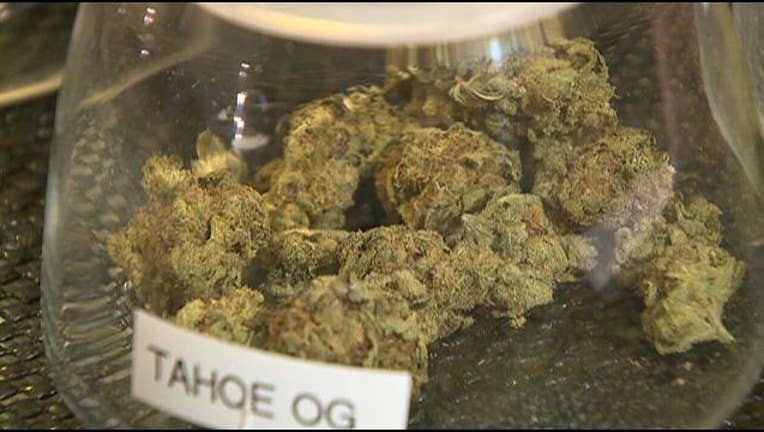 DENVER -    DENVER (AP) - Marijuana consumers were taking advantage of a tax holiday in Colorado on Wednesday, with some lining up early for doorbuster-style deals.
A quirk in state law led Colorado to suspend most taxes on recreational pot for one day, including a 10 percent sales tax on pot and a 15 percent excise tax on marijuana growers.
At The Grass Station near downtown Denver, a dozen shoppers were in line before doors opened.
"Lower prices are always better," said Benjamin DelCarpio of Centennial, who was rewarded for standing in line with a 50 percent off coupon.
The tax break is happening because Colorado underestimated overall state tax collections last year. Under the state Constitution, the accounting error triggers an automatic suspension of any new taxes -- in this case, the recreational marijuana taxes voters approved in 2013.
Retailers are hoping for big crowds, rolling out bargains to attract shoppers. The state had no estimate on how many shoppers might turn out.
Wednesday's break came a day after Colorado made final its accounts for the fiscal year that ended in June.
The final tax numbers covered the first full fiscal year in which adults over 21 could legally buy both marijuana and alcohol.
Alcohol excise tax collections were up 2.4 percent, to about $42 million. Marijuana-specific taxes came in at about $70 million.
The figures don't include a statewide 2.9 percent sales taxes. In other words, alcohol likely still produces more overall tax money than pot, though the state doesn't keep data on how much general sales tax comes from alcohol.
Recreational pot is taxed much more steeply than alcohol -- 25 percent, plus statewide and local sales taxes. Alcohol is taxed by volume, ranging from 8 cents a gallon for beer to $2.28 a gallon for liquor, plus sales taxes.
Colorado saw an increase last year in all three tax classes of alcohol. Beer was up 1.1 percent, liquor was up 3 percent, and wine was up 1.3 percent.
The pro-legalization Marijuana Policy Project lauded the sales tax holiday as "a much-deserved day off" for marijuana consumers, who carry a heavier tax burden than people who buy alcohol.
However, it's far too soon to say how marijuana legalization has affected behavior when it comes to consuming intoxicants.
A University of Colorado-Denver economist who has studied how marijuana availability impacts alcohol consumption said the Colorado numbers don't show much.
Economist Daniel Rees pointed out that beer sales growth didn't keep up with population growth in the last year, estimated at about 1.7 percent between 2014 and 2015.
"I wouldn't read too much into one state's experience," Rees said.