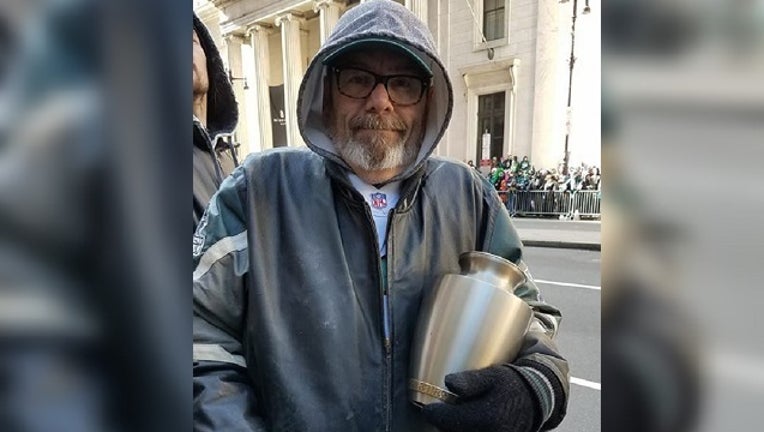 PHILADELPHIA (WTXF) - Hundreds of thousands of photos were taken at Thursday’s Super Bowl victory parade on Thursday, but one has stood out above the rest after going viral on social media.

The photo shows a man identified only as Dennis, wearing a Philadelphia Eagles jacket, jersey, and hat, and holding an urn in his left arm.

Dustin Javier, the man who took the photo, wrote on Facebook that Dennis had been standing next to him with the urn during the parade.

Dennis told Dustin that he was holding the remains of his late wife, Becky.

“He said, ‘She was a diehard Eagles fan so I had to make sure she was here for this,’” Dustin wrote.

From the sounds of it, several fans around Dennis had noticed what he was holding.

Dustin goes on to write that after a while an officer came up to Dennis and handed him a beverage.

“This is from the guys across the street,” the officer said.

At that point, Dustin writes that Dennis looked across the street to see a group of about 15 people in Eagles gear holding up beers to toast to him and his wife.

“Don’t even try to tell me we don’t have the best fans in the country,” Dustin writes to cap off his now viral post.