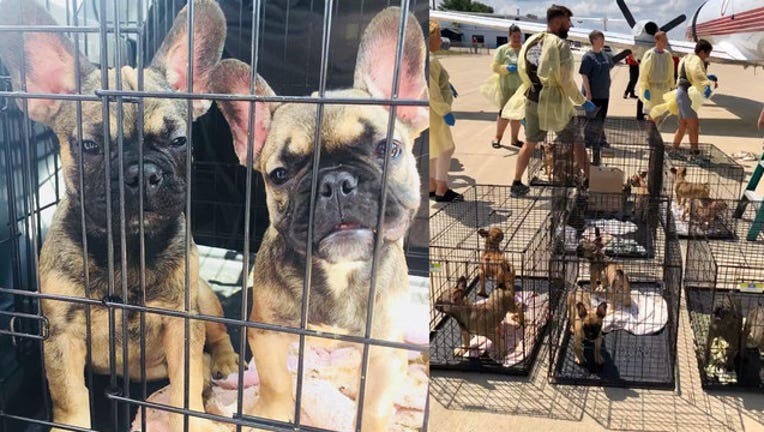 NEW YORK (FOX5NY) - 23 French Bulldog puppies that were rescued from a moving van in Texas are now in rehabilitation and will eventually be put up for adoption.

Late in July, 28 puppies were found by a Texas Department of Public Safety officer packed tightly in plastic crates in Texarkana, Texas.  It was 121 degrees in the back of the van.  The puppies had no food or water and were suffering from heat-related illnesses.

The Humane Society of the United States was asked to help find placement for these dogs, and connected authorities to Chicago French Bulldog Rescue.

The surviving puppies were transported to Illinois yesterday to continue to receive rehabilitative care and eventually seek adoption.

The puppies apparently were headed from the Ukraine to Houston but the man transporting them was not allowed to continue to Texas when the plane stopped in Chicago.  Authorities say he rented a moving van and drove to Texas.

When a trooper pulled over the van for a traffic stop, he found the puppies. Four of puppies died  from various illness.

The Chicago French Bulldog Rescue says all of the remaining puppies are ill and are in isolation.  They have a long road ahead to recover.

While they are going to be up for adoption later, the organization says that no applications are being accepted at this time.  For more information on the group you can go to www.frenchieporvous.org.