A New York City man was one of two people arrested in Maine for trafficking 2 lbs. of cocaine disguised as a marble cake.

AUGUSTA, Maine - Authorities pulled over a known drug dealer from New York City on a highway in Maine and found a block of cocaine disguised as dessert inside the car, according to the Maine Drug Enforcement Agency.

Acting on information from sources, agents from an Augusta-based drug task force tracked the car northbound along the Maine Turnpike on Tuesday, officials said. With the help of the Maine State Police, agents stopped the car, an Audi, on Interstate 295 as it entered Gardiner.

A police dog sniffed out the presence of drugs, authorities said in a news release. Agents and troopers then searched the car and found four pounds of cocaine and about $1,900 in cash, the Maine Drug Enforcement Agency said.

About two pounds of the cocaine was mixed with coffee grounds and wrapped to look like store-bought marble cake, authorities said. The coffee is used to try to mask the scent of the drugs, officials said.

Cops arrested the two people who were in the car — a 25-year-old New York City man who served time in prison on heroin and gun charges, and a 33-year-old woman from Winslow, Maine, the owner of the Audi, authorities said.

Authorities charged them with aggravated drug trafficking. They were released on bail and expected to appear in court this week.

The cocaine is worth about $200,000 on the street, the Maine Drug Enforcement Agency said.

This story was produced in New York City with The Associated Press. 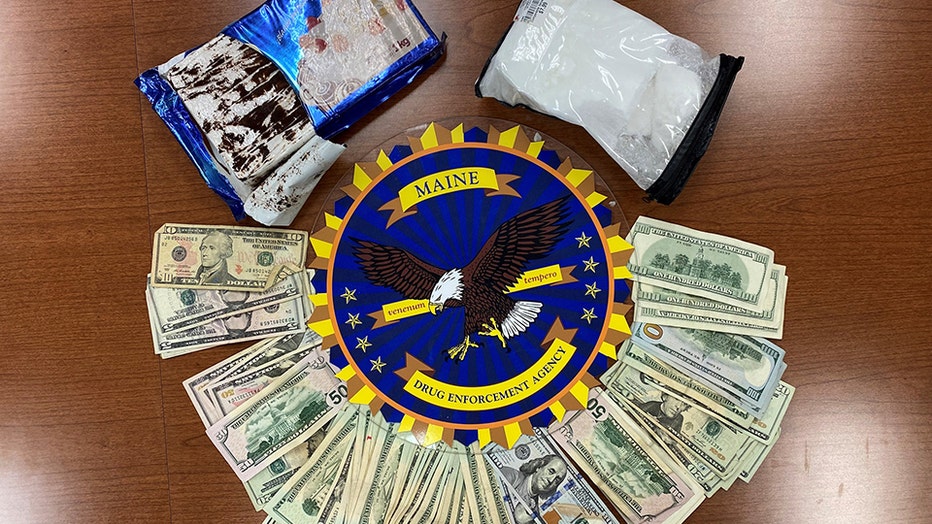 Cocaine and cash seized from a car in Maine. (Via Maine Drug Enforcement Agency)