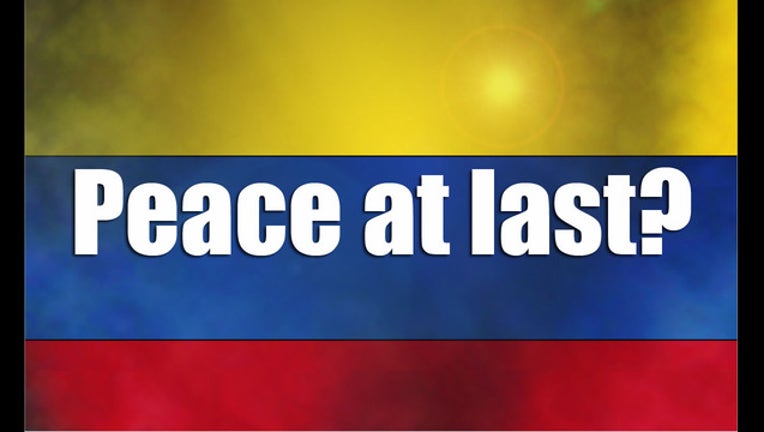 BOGOTA, Colombia (AP) - Colombian President Juan Manuel Santos and the head of the country's leftist FARC rebels have agreed on a cease-fire and rebel disarmament deal that moves the country to the brink of ending a 52-year war that has left more than 220,000 people dead.

At a ceremony in Havana attended Thursday by U.N. Secretary-General Ban-Ki Moon, a special U.S. envoy and the presidents of Cuba, Chile, Venezuela and other Latin American countries, Santos and FARC commander Rodrigo Londono, better known as Timochenko, listened to the reading of a deal laying out how 7,000 rebel fighters will demobilize and hand over their weapons once a peace accord is implemented.

The 1948 assassination of populist firebrand Jorge Eliecer Gaitan led to a political bloodletting known as "La Violencia," or "The Violence." Tens of thousands died, and peasant groups joined with communists to arm themselves. A 1964 military attack on their main encampment led to the creation of the Revolutionary Armed Forces of Colombia, or FARC.

Though nominally Marxist at its founding, the FARC's ideology has never been well defined. It has sought to make the conservative oligarchy share power and prioritized land reform in a country where more than 5 million people have been forcibly displaced, mostly by far-right militias in the service of ranchers, businessmen and drug traffickers. The FARC lost popularity as it turned to kidnapping, extortion and taxes on cocaine production and illegal gold mining to fund its insurgency.

In 2000, the United States began sending billions of dollars for counter-narcotics and -insurgency efforts under Plan Colombia, which helped security forces weaken the FARC and kill several top commanders. The State Department classifies the group as a terrorist organization and its leaders face U.S. indictments for what the George W. Bush administration called the world's largest drug-trafficking organization.

More than 220,000 lives have been lost, most of them civilians. In the past two decades, many of the killings were inflicted by the militias, which made peace with the government in 2003. The FARC abducted ranchers, politicians and soldiers who were often held for years in jungle prison camps. Its captives included former presidential candidate Ingrid Betancourt and three U.S. military contractors, all of whom were rescued in 2008.

Mid-1980s peace talks collapsed after death squads killed at least 3,000 allies of the FARC's political wing. Another effort fell apart in 2002 after the rebels hijacked an airliner to kidnap a senator. The current talks have been going on since 2012 in Havana.

On Wednesday, negotiators announced an agreement on a bilateral cease-fire and a blueprint for how an estimated 7,000 FARC fighters will demobilize and lay down their weapons. Accords have also been reached on land reform, combatting drug trafficking, the guerrillas' political participation and punishing war crimes on both sides. On Thursday, the formally agreed to the cease-fire and disarmament agreement at a dignitary-studded ceremony in Cuba.