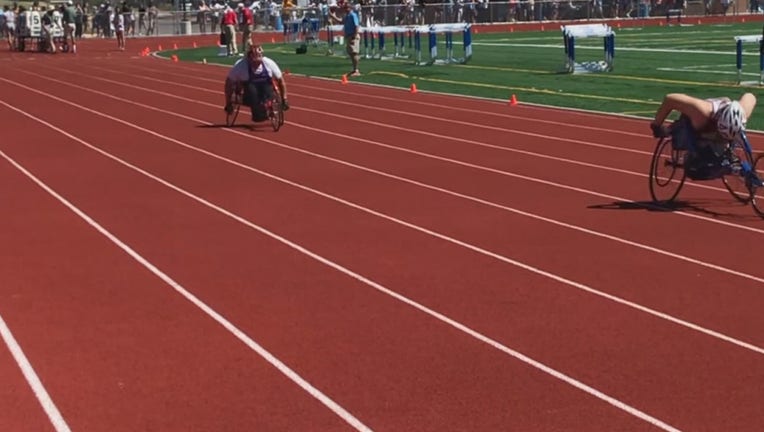 Coaches from both teams jumped to help when a wheelchair racer's tire broke mid-race.

(FOX 9) - Several track and field coaches and a racer in Buffalo are getting high marks for their work away from the starting line.

It all has to do with a pair of athletes and a tire on a wheelchair that broke at the worst possible time.

Coaches from both teams jumped in to help after a Minnesota wheelchair racer's tire broke in the middle of a race.

About 80 meters into the 100-meter wheelchair race Saturday, Blake Eaton’s tire broke. But, the Duluth competitor managed to stay upright and still win the race with help from coaches.

"I thought it was great for them to even try," Blake said. "I just didn’t know if it was going to work or not."

Coach Palmer said the team had tires and extra pieces in storage because they had issues early on with Macario Polomares’ chair. Polomares was competing against Eaton and also jumped in to help.

As luck would have it, they were only 12 minutes away from the storage space at Buffalo High School.

Rachel Busch got the spares and Scott Palmer went to work. Once they got the spare on, they still needed to install a push rail.

"They actually put it on backwards, had to take them all off again then go on again…it was just a whole kind of chaotic scene for me, my dad, my coaches and the Buffalo coaches all working together to get it done," Blake said.

Blake made the start of the 200-meter with seconds to spare, and Macario even held it up so Blake could get there.

"Just watching the 200, I was crying," Rachel said. "And the other Buffalo coaches standing next to me at the race finish, and we were all like oh, so special!"

Blake would win that event, too, all because of his opposing team’s help.

"If we were in the same situation, I know there would be other coaches willing to help out so our kids could compete as well," Scott said.

"I wasn’t expecting to be able to do it, but they just wouldn’t quit working and they were just trying to get it done," Blake said.