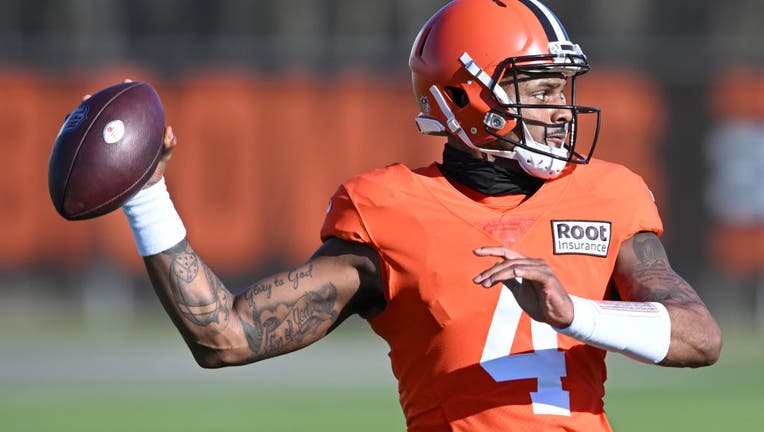 BEREA, OHIO - NOVEMBER 23: Deshaun Watson #4 of the Cleveland Browns throws a pass during a practice at CrossCountry Mortgage Campus on November 23, 2022 in Berea, Ohio. (Photo by Nick Cammett/Getty Images)

Speaking to the media for the first time since Aug. 18, Watson declined to discuss his suspension or the reasons behind it. He has been accused by more than two dozen women of sexual harassment and assault during massage therapy sessions.

The 27-year-old will play his first game for the Browns on Sunday in Houston, where he starred for four seasons with the Texans and where the alleged misconduct took place.

Watson opened with a statement, saying he was advised by his legal and clinical teams to only address "football questions."

"I’m focusing on football," he said. "My main focus is locked in on the game plan and trying to execute and make sure that I’m keeping the standard up for the Cleveland Browns so we can try to win."

Watson agreed to the lengthy suspension, a $5 million fine and to undergo professional counseling and therapy after an independent arbitrator ruled that he violated the league’s personal conduct policy.

He wouldn’t say what he learned during his time away or if the counseling helped him.

"I respect your question," Watson said inside Cleveland’s indoor field house. "I understand. But that’s more in that phase of clinical and legal stuff and I’ve been advised to stay away from that and keep that personal."

Watson’s return to the field will be his first game in 700 days. In addition to facing former teammates and fans who cheered for him, some of the women who sued him over the allegations are expected to attend the game, according to their attorney.

"I have so much love for the city of Houston and H Town."

Watson’s suspension started Aug. 30. He was banned from the team’s facility and returned Oct. 10, when he was allowed to attend meetings and work out. The three-time Pro Bowler returned to practice on Nov. 16.

Watson settled with 23 of the women who sued him over the allegations. Two lawsuits remaining pending.

He has always maintained he didn’t harass or force himself on any women. Two grand juries in Texas declined to indict him over the allegations.