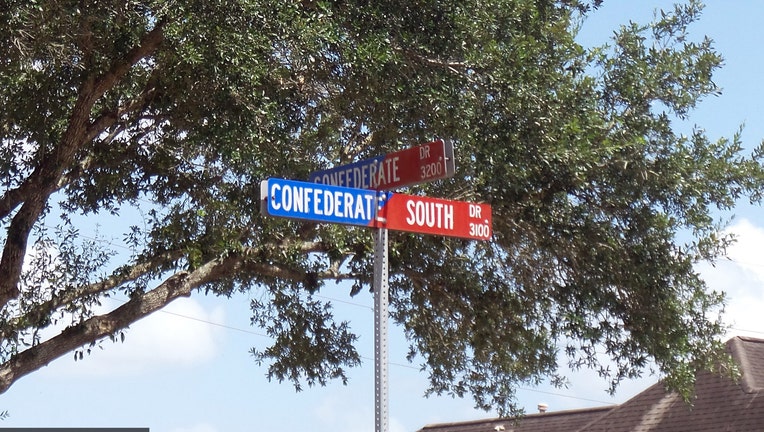 MISSOURI CITY, Texas - City Council members in Missouri City have unanimously approved an ordinance to change the name of Confederate Drive in the Vicksburg subdivision to Prosperity Drive.

According to the city, the change was proposed by homeowners, and the City Planning Department supported the residents’ application to replace the controversial street name with one that is more equitable and inclusive.

Rhonda Gilbo was the person who spearheaded the name-change application and was successful in getting 70% of her neighbors to support the measure, according to the city.

She told the city the process of removing the name "Confederate" from community streets was started about six years ago by a homeowner who lived on Confederate Court, but that effort did not gain traction. Gilbo acknowledged the change has been a long time coming, but she said, "It was worth the wait."

The ordinance passed on its second reading, the city said.

During the first reading, Director of Development Services Jennifer Thomas Gomez suggested the Council also consider changing the names of other nearby streets that contain the word "Confederate," so as to avoid confusing the U.S. Postal Service and other mail and delivery couriers. Confederate Drive South and Confederate Court also lie within the Vicksburg subdivision.

City council members also voiced their feelings about the ordinance during the readings.

Councilmember Vashaundra Edwards, At-Large Position #1, said, "I’m actually happy that this has been brought forth for us to change. It’s heavily offensive to have these types of street names still prominent in our city. I believe we’re moving forward as a city as well as a country, and the fact that we’re changing these offensive names, I am just ecstatic. And I’m glad that we are doing our due diligence as a city to provide these resources to the residents who choose to move forward with the name change."

Councilmember Lynn Clouser, At-Large Position #2, said, "I do know that [for] the residents on this street, this has been a long time coming for them; they have been waiting for this. So if they have met the threshold, I am ready to move forward."

Councilmember Jeffrey Boney, District B, said, "These are racially insensitive and degrading names. Another lady mentioned Watts’ Plantation. I don’t think a lot of people really truly understand the impact mentally and emotionally of how those names and memories of those incidents and names impact you. You have someone over there who was the first grand wizard of the Ku Klux Klan that is on one of the streets. So when you see that, have to live on that street or drive by that on a regular basis, it is hurtful internally."

Councilmember Boney also shared some background information on the name change, which will be paid for by the applicants.

"Back on July 20th of last year, when this came before Council," said Boney, "one of the things I recognized was that our threshold to consider items like this was at 90%, which was extremely too high. So lowering it to 70% has now proven that was the right decision, and you pretty much had synergy amongst the community that this is what they collectively want and are willing to pay for, because these are expenses that are at not being paid for by the city, but by themselves."