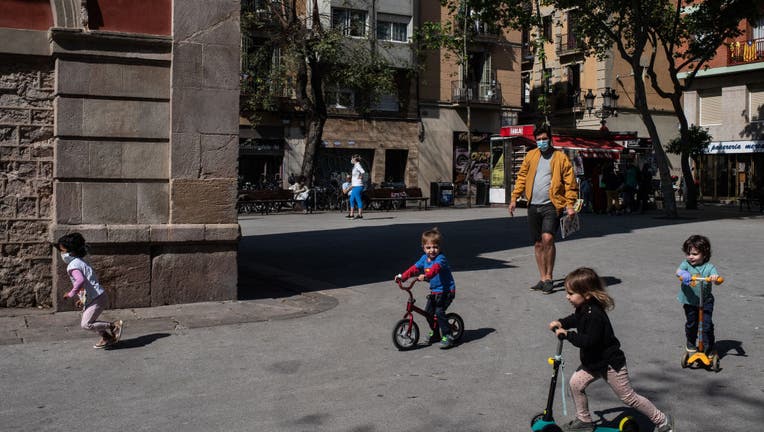 Children play at Plaça de la Vila de Gracia on April 26, 2020 in Barcelona, Spain. Children in Spain, are now allowed to leave their homes for up to an hour per day. (Photo by David Ramos/Getty Images)

BARCELONA, Spain (AP) - Spain has let children leave their homes for the first time in six weeks. The move comes at the start of a week in which Italy and France also are expected to detail their plans to ease some of the world's strictest coronavirus lockdowns. Tentative hopes of a gradual return to normal life are combining with fears of a new flare-up in infections as nations around the world take divergent paths on when to reopen their economies after weeks at a standstill.  Spain has reported its lowest daily death count for coronavirus infections in five weeks as its strict lockdown restrictions begin to pay dividends. Spanish health authorities say that 288 people died from COVID-19 over the previous 24 hours, taking the total to 23,190 since the start of the outbreak. It is the first time the daily death toll has fallen below 300 fatalities since March 20. The daily number of confirmed new infections has also dropped. Spain counts 207,634 confirmed cases overall, but authorities say that the true number of infections is unknown due to limits on testing. The daily rate of infection has also fallen dramatically. Spanish health official Fernando Sim=n says, ""The magnitude of today's decrease is important."

LONDON (AP) - British Prime Minister Boris Johnson is returning to work after recovering from a coronavirus infection that put him in intensive care. Johnson's office says he will be back at his desk Monday, two weeks after he was released from a London hospital. Johnson, 55, spent a week at St. Thomas' Hospital, including three nights in intensive care. His return to work comes as the government faces growing criticism over the deaths and disruption the virus has wreaked in the U.K. More than 20,000 people with COVID-19 have died in U.K. hospitals and thousands more are thought to have died in nursing homes.

BERLIN (AP) - Germany's labor minister wants to enshrine into law the right to work from home if it is feasible to do so, even after the coronavirus pandemic subsides. Labor Minister Hubertus Heil told Sunday's edition of the Bild am Sonntag newspaper that he aims to put forward such legislation this fall. He said initial estimates suggest the proportion of people working from home has risen from 12% to 25% during the virus crisis, to around 8 million people. Heil stressed that the aim is "to enable more home working, but not force it." 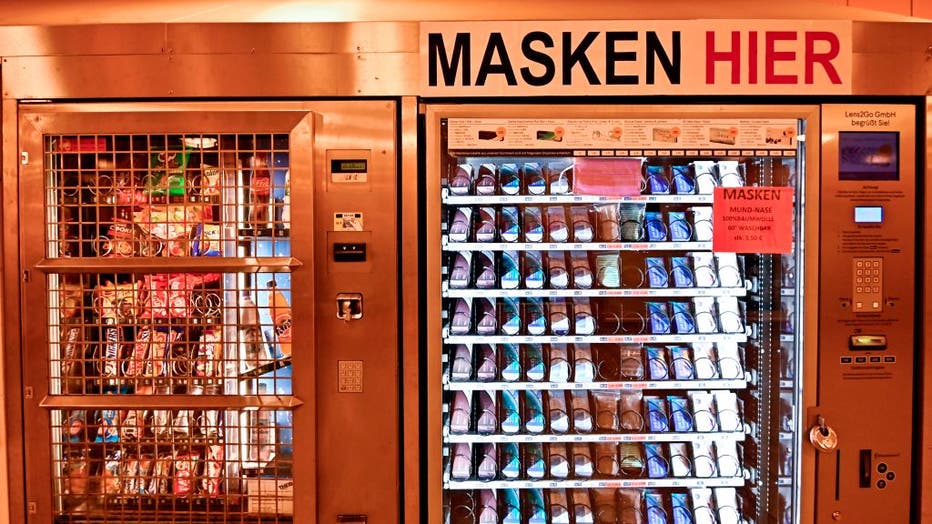 Facial masks are on sale at a vendor in a Berlin subway station on Protective masks will be required on public transport in most parts of Germany, with capital Berlin joining a wave on April 27, 2020 of federal states in ordering the measure to stem

JERUSALEM (AP) - Israel's embattled health minister says he is stepping down following a public uproar over his handling of the coronavirus crisis and his own COVID-19 infection. Health Minister Yaakov Litzman made no reference to his much-criticized performance in recent months, saying that he will take over as Construction Minister once a new government is formed. Israel is grappling with a virus outbreak that has infected over 15,000 people and killed nearly 200. The government has started easing restrictions and allowed some small businesses to reopen. But it will impose a lockdown this week for the country's Independence Day holiday.

The Africa Centers for Disease Control and Prevention says more than 30,000 confirmed cases of COVID-19 have been reported in the 54 countries of Africa. The report issued Sunday showed there have been 1,374 deaths in Africa. Only two African countries have not reported any cases of the disease. They are the tiny mountain kingdom of Lesotho in southern Africa and Comoros, the small Indian Ocean islands.South Africa has the continent's most COVID-19 cases with 4,361. 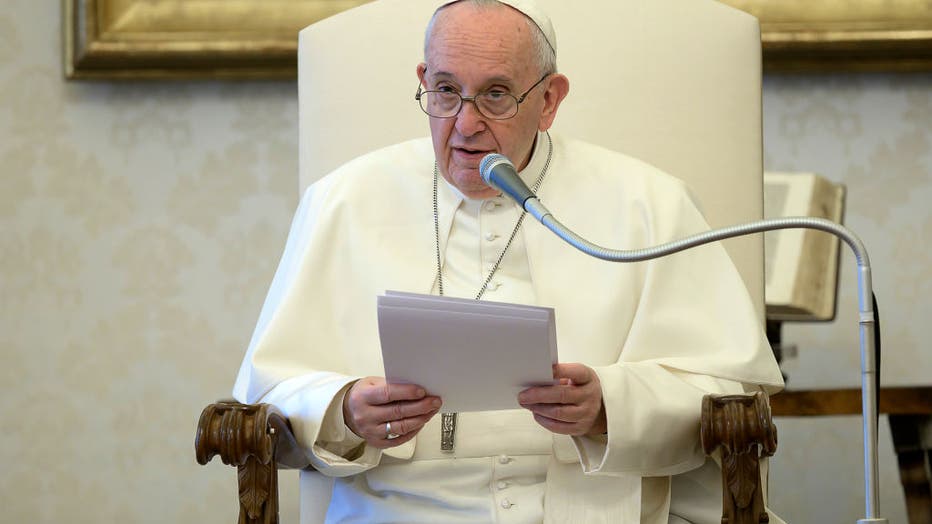 VATICAN CITY, VATICAN - Pope Francis attends his streaming Weekly Audience from his private library of the Apostolic Palace, due to Coronavirus on April 22, 2020 in Vatican City, Vatican. Photo by Vatican Media / Vatican Pool via Getty Images)

Pope Francis is stressing efforts to combat malaria must continue even as the world fights COVID-19. Concern has been rising that while the world is focused on the pandemic, people suffering from other illnesses could receive less attention. Francis added his voice to that chorus of concern, saying "while we are fighting the coronavirus pandemic, we must also continue our efforts to prevent and treat malaria, which threatens billions of people in many countries." The U.N. World Health Organization has said severe disruptions to anti-malaria campaigns could lead to a doubling in the number of malaria deaths in sub-Saharan Africa.

BANGKOK (AP) - Indian Prime Minister Narendra Modi has cautioned the country's 1.3 billion people against any complacency in the fight against the coronavirus epidemic. On a Sunday radio talk show, Modi said that people will have to change their social habits by sticking to distancing, wearing masks and not spitting in public. He also said that a traditional system of Indian medicine, known as Ayurveda, which strongly recommends yoga exercises and drinking hot water, can be extremely helpful in building immunity. China on Sunday reported no new deaths from the coronavirus for the 11th straight day. It also confirmed 11 more cases, raising its total to 82,827.

WASHINGTON (AP) - With coronavirus tests in limited supply, the Pentagon has devised a phased approach that focuses first on testing an elite slice of the military that includes counterterrorism and strategic nuclear forces. The aim is to allocate testing materials in a way that preserves what the military deems its most vital missions and takes into account the test requirements for high-risk civilians. This approach belies President Donald Trump's assertions that national testing capacity is not an issue. Pentagon officials say they aim to increase the number of tests from about 7,000 a day currently to 60,00 a day by June.