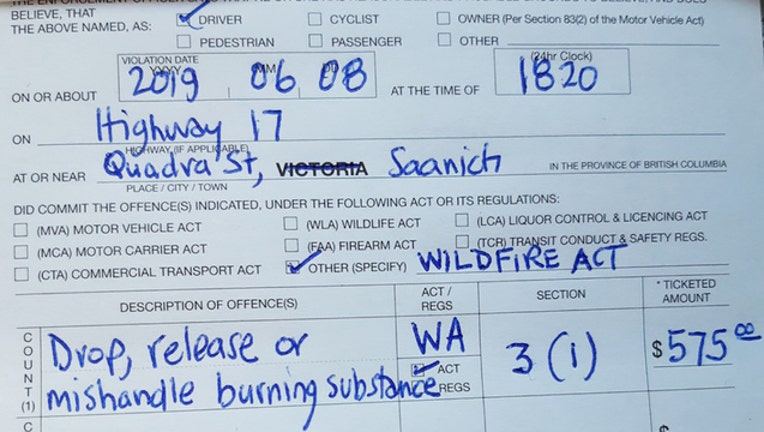 VICTORIA, British Columbia (FOX 13) - A police chief in Canada said he issued a pricey ticket to a driver who threw a lit cigarette out of his car window.

Victoria Police Chief Del Manak posted a photo of the $575 ticket after he said he witnessed the driver tossing the cigarette out of his vehicle on a highway in the city of Saanich.

The ticket was for a violation of British Columbia's Wildfire Act, which calls for stiff penalties for those who could potentially start a wildfire. In this instance, the law calls for a $575 fine for failing to extinguish a fire.

Manak tweeted, "575 reasons not to throw your lit cigarette out the car window."

When he asked the driver why he did it, Manak said the driver replied, "I didn't want my car to burn."

"Then don't smoke in your car," the police chief replied, according to his tweet.

This is the second time in less than a year that Manak has pulled someone over for throwing a lit cigarette out of their vehicle, according to the Vancouver Sun.