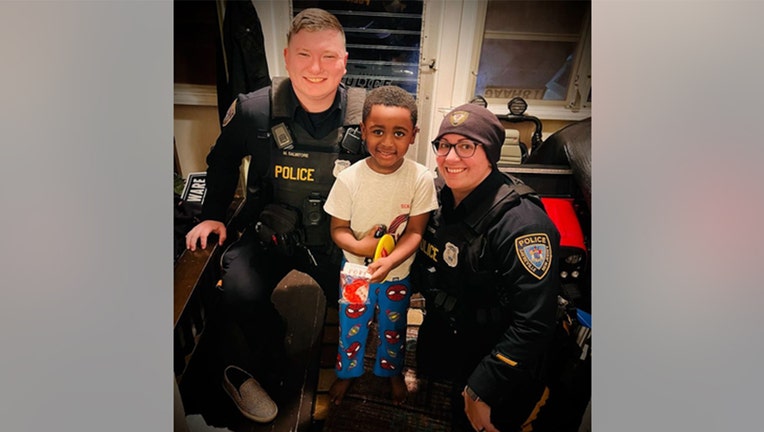 SAYREVILLE, N.J. - Two New Jersey police officers are being praised for their acts of kindness after replacing a little boy’s toy police car.

On Saturday, 4-year-old Justice Tucker of Sayreville, New Jersey, was upset when his police power wheels no longer worked. He then started to play with his mother’s phone.

Rasheeda Paige’s phone was locked but was still able to make emergency calls.

"He tried to unlock it and then it called the police," Paige told FOX Television Stations.

Justice then gave the phone to his mother who explained to the 911 operator what had happened.

"I told them, ‘I apologize, it was my son who was trying to use my phone,’" Paige explained.

Officers Vicky Teator and Matt Salvatore still came to the house and spoke with Justice, who told the officers he had a birthday coming up and his toy police car was broken.

The officers returned with a new handheld toy police car for Justice.

"The officers took it upon themselves to get him a new toy police car for his birthday," the department wrote on its Facebook page. "Although it’s not our usual call for service, our officers were more than happy to help out and put a smile on his face."

"It was really, really sweet," Paige said, adding that her son is happy with his new toy. She explained her brother is a detective in Essex County, New Jersey, and Justice looks up to his uncle.