Joe Biden hopes the South Carolina victory will be enough to establish him as the clear alternative to Bernie Sanders as the race quickly shifts nationwide.

The victory came at a crucial moment in Biden's 2020 bid as he bounced back from underwhelming performances in the first three contests and headed into “Super Tuesday,” when voters in 14 states go to the polls and about a third of the delegates needed to win the Democratic nomination are at stake.

Biden hopes the South Carolina victory will be enough to establish him as the clear alternative to Sanders as the race quickly shifts nationwide. Standing in Biden's way, in addition to Sanders, is former New York City Mayor Mike Bloomberg, one of the world’s richest men, who has spent more than half a billion dollars courting voters in dozens of states yet to vote.

The South Carolina primary was the first major test of the candidates' appeal among black voters. And while it gave the 77-year-old Biden a win when he most needed it, he must still prove that he has the financial and organizational resources to dramatically expand his campaign in the next 72 hours. He will also be under pressure to rely on his decades-long relationships with party leaders to create a new sense of inevitability around his candidacy.

Even before news of Biden's win was declared, Bloomberg announced his own plan to deliver a three-minute prime-time address Sunday night on two television networks. He didn't say how much he paid for the air time, which is unprecedented in recent decades.

And Sanders was already peeking ahead to Super Tuesday, betting he can amass an insurmountable delegate lead at that point. After two consecutive victories and a tie for the lead in Iowa, the 78-year-old Vermont senator's confidence is surging.

Sanders was spending the lead-up to Super Tuesday campaigning in the home states of two major Democratic rivals, betting he can score a double knockout blow — or at least limit the size of their victories. 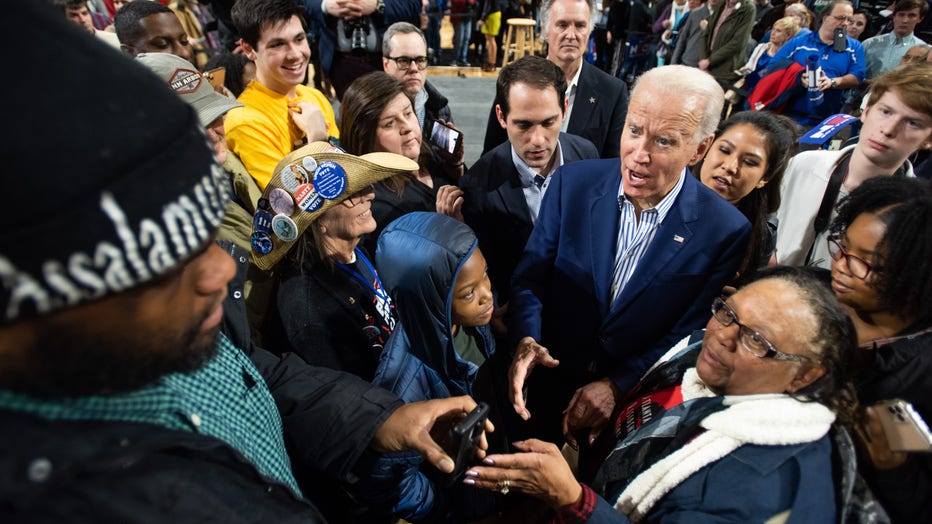 In a power play, Sanders hosted a midday rally Saturday in downtown Boston, campaigning in the heart of liberal ally Elizabeth Warren's political turf. Addressing a crowd of thousands on the Boston Common, Sanders said his success in the Democratic primary means “the establishment is getting very nervous” — but he never predicted victory in South Carolina.

On the eve of Super Tuesday, Sanders will host a concert in Minnesota, where home-state Sen. Amy Klobuchar is looking for her first win.

Senior adviser Jeff Weaver was among the staffers dispatched to California on Saturday. He said Sanders is aggressively hunting for delegates, noting that their campaign's experience during the 2016 primary against Hillary Clinton taught them that any candidate who finishes Super Tuesday with a significant delegate advantage will be difficult to catch.

“I’m confident we’re going to do very, very well across the country," Weaver said of the coming four days. He also sought to downplay the importance of South Carolina, where “Biden is expected to win.”

“For the vice president, he needs an extraordinarily large win in South Carolina in order to convince folks he’s going to be able to go the distance,” he said.

Yet the Democrats' 2020 primary election is far from a two-person race.

In South Carolina, billionaire activist Tom Steyer has spent more than $19 million on television advertising — more than all the other candidates combined — in his quest for his first top finish in four contests. At his state campaign headquarters on Saturday, Steyer said he felt optimistic going into the vote and was looking ahead to trips to Alabama and Texas, two Super Tuesday states.

Not ceding anything, Pete Buttigieg is fighting to prove he can build a multiracial coalition. And with the help of super PACs, Warren and Klobuchar have vowed to keep pushing forward no matter how they finish on Saturday.

Still, Saturday was all about Biden and whether he might convince anxious establishment Democrats rally behind him at last.

RELATED: The South Carolina primary is Feb. 29 — here’s what you need to know

Elected officials inclined to embrace his moderate politics had been reluctant to support him after bad finishes in Iowa and New Hampshire and a distant second place in Nevada last week. Yet fearing Sanders' polarizing progressive priorities, they're still searching for an alternative who's viewed as a safer bet to defeat Trump in November.

Senior Biden adviser Symone Sanders shifted away from calling South Carolina Biden’s “firewall” and instead called it a “springboard,” on par with how the state boosted the presidential aspirations of Barack Obama in 2008 and Clinton in 2016.

That sentiment was echoed by former senior Obama adviser David Axelrod, who said a big Biden win in South Carolina could give him a Super Tuesday boost that might force several candidates to quickly consider whether to proceed, including Bloomberg.

“If Biden wins by a big margin, it will translate into a bigger day for him on Tuesday," Axelrod said. “And if he beats Bloomberg by a significant margin on Tuesday, Bloomberg is going to have to consider what he’s doing here.”

Indeed, South Carolina represents much more than the fourth state on the Democrats' months-long primary calendar.

It serves as the first major test of the candidates' strength with African American voters, who will be critical both in the general election and the rest of the primary season.

Roughly three in 10 people of voting age in South Carolina are black, according to census data.

Meanwhile, some leading Democrats in South Carolina were concerned that the intensity of the anti-Sanders movement within their own party would undermine their quest to deny Trump a second term.

Gilda Cobb-Hunter, a South Carolina state representative and president of the National Black Caucus of State Legislators, warned Democrats who vehemently oppose Sanders to “stop being stupid.” While she's on Steyer's payroll, she said she would “of course” support Sanders if he emerged as the nominee.

“As a black woman, I can’t afford for white folks' resentment to determine who the next president is or is not going to be,” she said. “Their resentment doesn’t translate to the struggle and the hell that communities of color will continue to face — and worse — if Trump is reelected.”

There was evidence that Biden’s status as former President Obama’s two-term vice president helped him win over African Americans.

South Carolinians were voting in Saturday’s Democratic presidential primary with a greater sense of nostalgia for the Obama presidency than voters in earlier contests — likely reflecting the state’s sizable bloc of African American voters.

Voters in the Palmetto State were more likely than those in Iowa and New Hampshire to want to restore the political system to the way it was before Trump took office, as opposed to seeking a candidate who will enact fundamental change.

That's according to AP VoteCast, a wide-ranging survey of more than 1,400 voters in South Carolina's Democratic primary.

About 40% of voters in South Carolina picked health care as the top issue, while 22% said the economy and jobs are most important. That’s also according to an AP VoteCast survey of the electorate. Fourteen percent of voters identified climate change.

By comparison, roughly two-thirds of white voters wanted a presidential candidate who would bring fundamental change to Washington.

Close to 9 in 10 Democratic voters said it’s important for their nominee to be a strong leader.

Saturday's election in South Carolina marks the first statewide test of its new fleet of electronic voting machines, a $50 million upgrade from an old and vulnerable system that lacked any paper record of individual votes. The new machines produce a paper record that can be verified by the voter and checked after the election to detect any malfunction or manipulation.