LAS VEGAS - Bernie Sanders scored a resounding victory in Nevada’s presidential caucuses on Saturday, cementing his status as the Democrats’ national front-runner amid escalating tensions over whether he’s too liberal to defeat President Donald Trump.

The win built on Sanders’ win earlier this month in the New Hampshire primary. He essentially tied for first place in the Iowa caucuses with Pete Buttigieg, the former mayor of South Bend, Indiana, who has sought to position himself as an ideological counter to Sanders’ unabashed progressive politics, but was fighting for a distant second place in Nevada.

The victory, while encouraging for Sanders supporters, only deepens concern among establishment-minded Democratic leaders who fear that the self-described democratic socialist is too extreme to defeat Trump. Sanders for decades has been calling for transformative policies to address inequities in politics and the economy, none bigger than his signature “Medicare for All” health care plan that would replace the private insurance system with a government-run universal system.

Sanders has emerged as the front-runner in the party’s national race, even as establishment-minded Democrats raise concerns about the self-described democratic socialist’s ability to defeat President Donald Trump this fall. A half-dozen more-moderate candidates are fighting to become the preferred Sanders’ alternative, yet all were trailing Sanders based on the early returns. 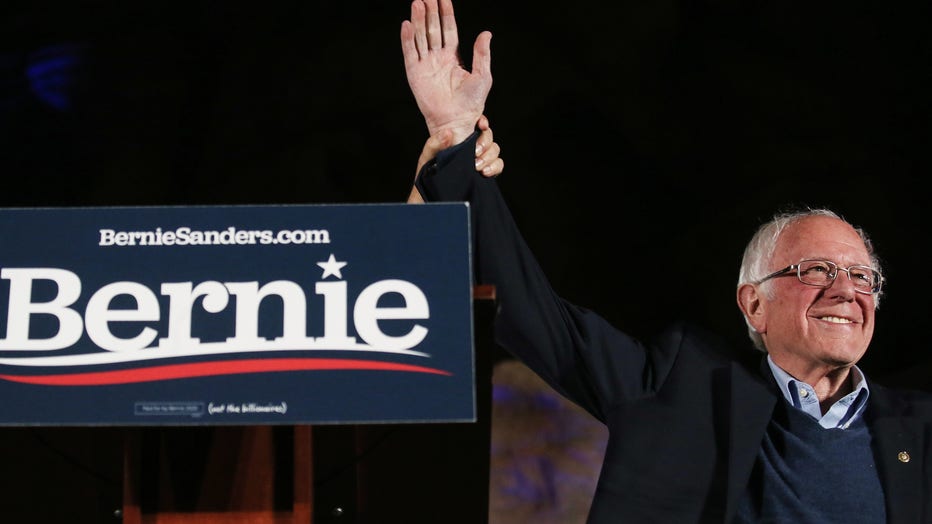 In a show of confidence, Sanders left Nevada early to rally supporters in Texas, which offers one of the biggest delegate troves in just 10 days on Super Tuesday. The progressive senator told cheering supporters in El Paso that Trump is “a pathological liar running a corrupt administration.” He also called Trump “a religious bigot.”

The Nevada verdict represents the third in a primary season that will span all 50 states and several U.S. territories, ending only at the party’s national convention in July. But with two more rounds of voting scheduled over the next 10 days -- including Super Tuesday’s massive delegate haul -- the party may identify a consensus candidate long before the convention.

Sanders and his allies were increasingly confident. In Nevada, he had strong support from Latinos and rank-and-file union workers who have warmed to his calls to transform the nation’s economy and political system to help the working class.

There was skepticism about Pete Buttigieg’s ability to win over a more diverse set of voters after strong finishes in Iowa and New Hampshire. Joe Biden, who struggled in those early states, looked to Nevada’s voters of color to prove he still had a viable path to the nomination.

MORE: Follow the latest updates in the 2020 presidential election

Sens. Elizabeth Warren and Amy Klobuchar also were fighting for survival, hoping to benefit from outside money from newly created super PACs.

New York billionaire Mike Bloomberg, who dominated the political conversation this week after a poor debate-stage debut, wasn’t on the ballot. He’s betting everything on a series of delegate-rich states that begin voting next month.

Billionaire Tom Steyer spent more than $12 million of his own money on television advertising in Nevada, according to data obtained by The Associated Press.

There were still questions about when final results from Saturday’s voting might be released under the complicated new caucus reporting process.

“Our goal is to get results as soon as possible,” said Democratic National Committee Chairman Tom Perez. “But also, first and foremost, to get it right.”

Meanwhile, Nevada’s Republican party formally awarded all 25 of its delegates to Trump.

The state GOP had already canceled its caucuses, but the state committee voted by acclimation to give the Republican president all of its delegates as Democrats were tallying caucus votes, according to party executive director Will Sexauer.

On the Democratic side, hundreds of uniformed housekeepers and casino workers at noon streamed into the Bellagio, one of seven casino-resorts on the Las Vegas Strip among 200 locations statewide hosting caucuses.

Nevada is the third contest on a 2020 election calendar marked by chaos and uncertainty after the opening votes in Iowa and New Hampshire, overwhelmingly white, rural states. The first presidential contest in the West is testing the candidates’ strength with black and Latino voters for the first time in 2020.

“Nevada represents an opportunity for these candidates to demonstrate their appeal to a larger swath of our country,” said state Attorney General Aaron Ford, a Democrat who is not endorsing a candidate.

Nevada’s population aligns more with the U.S. as a whole, compared with Iowa and New Hampshire: 29% Latino, 10% black and 9% Asian American and Pacific Islander.

Party Chairman Perez said a number of factors, including early voting and potentially high turnout, could affect the tabulation and timing of results. In addition, Nevada, like Iowa, reports three sets of data from the multistage caucus process.

On Friday, party leaders issued a memo clarifying that, while caucus leaders could still use an online form to submit results from individual precincts, they should use a dedicated hotline to call and text in results as their primary form of reporting.

In Iowa, overwhelmed phone lines caused caucus leaders to wait on hold for hours, contributing to the delay in reporting the results. Nevada Democrats brought in extra help from other state parties to help handle the reporting Saturday night.

Early voting was likely to pose another challenge.

State party officials said that 74,611 ballots were cast during the four-day early voting period, and a majority were first-time caucus-goers. In 2016, a total of 84,000 Nevada voters participated in the Democratic caucuses.

At the Bellagio caucus site, 41-year-old Christian Nielsen, a scuba diver for the Cirque du Soleil show “O,” said he was backing Sanders because he believes the country needs a “major change in the White House.”

“We need somebody in the White House who has been on the right side of history for their entire career, somebody who stands with the working class, and will make things more fair for everybody,” Nielsen said.

He said he tried to vote early but the line was three hours long. He said the sign-in process at the Bellagio was quick and painless.