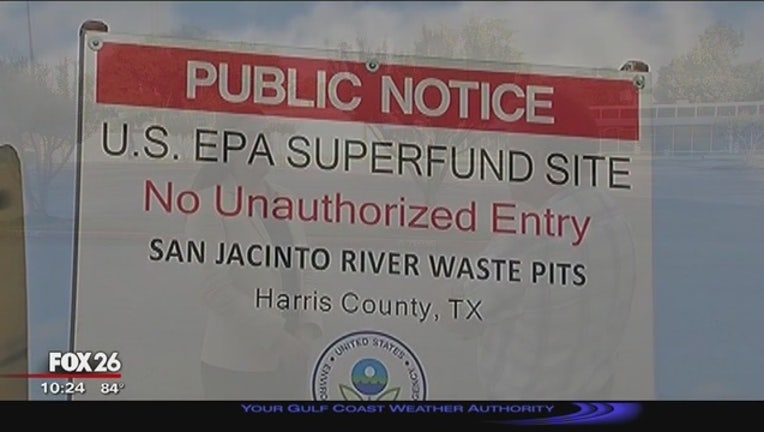 The barge that hit the San Jacinto River Waste Pits Superfund site was floated off today. The EPA is conducting sonar test to assess what damage may have been done to the cap of the site.  A previously scheduled community meeting will be held Tuesday night, from 6:30 p.m. to 8:00 p.m. at the Highlands Community Center, 604 Highland Woods Drive, Highlands, Texas 77562.

Over multiple years of coverage, FOX 26 has documented the concerns of hundreds of citizens in the Highlands community, many of whom attribute extraordinary cancer rates to escaped Dioxin from the dump.

HOUSTON (FOX 26) September 0, 2019     Early Friday morning nine commercial barges broke loose on the San Jacinto River due to the flooding brought on by the remnants of Tropical Storm Imelda, The EPA Region 6 reports that all barges are currently intact and none of the cargo has leaked into the waterway,

One barge containing 10,000 barrels of lube oil is grounded on the northeast corner of the San Jacinto Waste Puts Superfund Site. EPA Region 6 is coordinating with the U.S. Coast Guard to ensure the responsible party for the Superfund site is consulted before the grounded barge is moved, in order to minimize the damage to the site's armored cap.

In June, 2018, the Environmental Protective Agency's dive team discovered that the protective cap at the San Jacinto River Waste Pits Superfund Site was missing and the underlying waste material was exposed.

"The EPA dive team has just found astronomical levels of Dioxin, which is a highly-toxic waste, exposed to the San Jacinto River," said Jackie Young with the Texas Health and Environment Alliance. "We don't know how long the waste has been there and where it has potentially traveled."

Young added that this has been an ongoing issue at the Superfund Site.

"They have made numerous repairs to this site and it keeps failing," described Young. "The rocks keep getting displaced. We have high rates of cancer in our surrounding communities and having this waste exposed is completely unacceptable."

The EPA says the Dioxin does not dissolve easily in water and the levels are 2,000 times more than what would be considered safe.

"We've been going through this process now for nearly a decade and it is time this waste is removed once and for all," said Young.