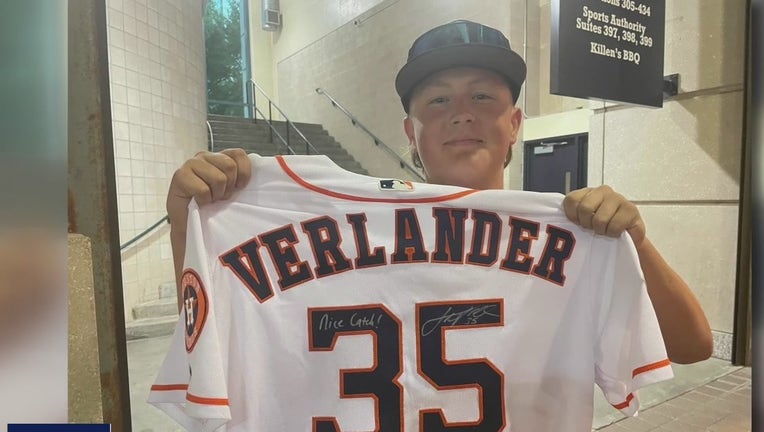 Photo of Rylan Freeman with a signed Justin Verlander jersey he received.

HOUSTON - A Houston Astros fan can’t wipe the smile off of his face following Sunday’s game at Minute Maid Park.

In the fourth inning, Astros designated hitter JJ Matijevic launched a home run to the Crawford Boxes above left field. Rylan Freeman, a 16-year-old, had been sitting in the section with his father and brother.

According to Freeman, they hadn’t planned on attending the game. They were visiting Houston from Corpus Christi for a baseball tournament. However, at the last minute, they decided to buy tickets to celebrate Father’s Day.

"There’s a one in a million chance of that happening," said Freeman. "It’ll never happen again."

Matijevic’s home run landed in Freeman’s section. He says the ball bounced around before he was able to grab it.

"I’m thinking oh my gosh, oh my gosh, and then it moves away from us," said Freeman. "Then it goes, boom. It falls right in the floor in front my dad’s legs. I just went down and grabbed it."

The game was on aired national television. Following the home run, TV cameras watched closely as Freeman celebrated with his father and brother.

The home run was Matijevic’s first career Major League hit. As a result, a member of the Astros staff negotiated with the Freeman family to return the ball to Matijevic.

"We really had no idea about negotiating anything," said Freeman’s father, Jim. "A camera guy asked us, what are you going to ask for. I didn’t know what the protocol was but [knew] it was going to be exciting."

Eventually, Freeman and the Astros made a deal. He returned the home run ball for six tickets to a future game, including access on the field for batting practice. In addition, he received a signed Jose Altuve baseball and an autographed Justin Verlander jersey.

Matijevic was all smiles after the game speaking with reporters. He said he plans to give the home run ball to his father.

"[I’ll] give it to my dad," said Matijevic. "100 percent. That’s exactly what I was thinking in the dugout after I hit it. I’m just happy I got the ball back and thank you."

Freeman says he plans to use the six tickets with his family and a friend. Who knows, maybe they’ll catch another home run.