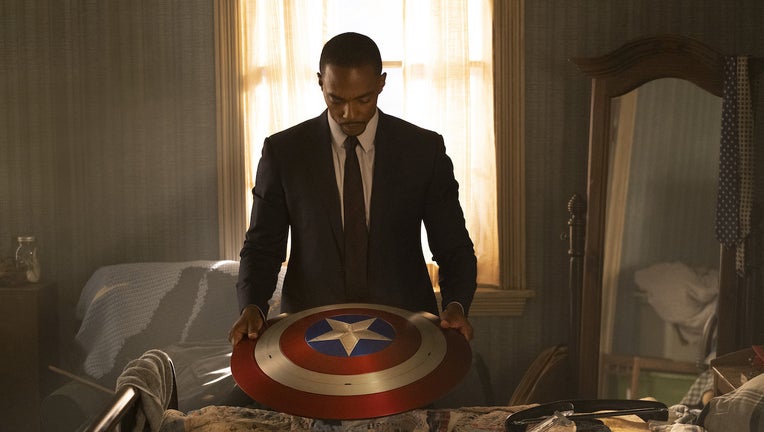 Anthony Mackie in "The Falcon and the Winter Soldier" (Photo: Chuck Zlotnick/Marvel Studios)

CHICAGO - Steve Rogers still prominently appears in the logo that precedes each and every Marvel Studios title, on screens both big and small. But while that Cap lives on in that logo (and the hearts of fans), there’s a new Cap in town.

Deadline reports that, per its sources, Anthony Mackie has finalized a deal to don the stars, stripes and shield for Marvel’s upcoming Captain America film, the fourth from the entertainment giant.

And it’s not the first time Mackie has wielded the vibranium shield. After Steve Rogers (Chris Evans) passed the shield and title on to Mackie’s Sam Wilson — also known as the Falcon — it was thought that Sam would begin this year’s series "The Falcon and the Winter Soldier" with the famous accessory securely on his arm.

Yet "The Falcon and the Winter Soldier" dealt with Sam’s reluctance to assume the mantle, as well as his deeply conflicted feelings about what the shield represents, the latter exacerbated when he meets super soldier and Korean War veteran Isaiah Bradley (Carl Lumbly).

By the end of the series, however, Sam’s using both the shield and his high-tech wings to save the day.

"Captain America 4," which will eventually get a more interesting title, will feature a screenplay from "Falcon" head writer Malcolm Spellman and staff writer Dalan Musson. No director has been announced.

There’s no word on other potential cast members for the film, which is unlikely to arrive in theaters until 2023 — but Sebastian Stan’s Bucky Barnes, Sam’s partner-in-superheroics for much of "Falcon," seems a safe bet.

This year will see the release of "Shang-Chi and the Legend of the Ten Rings," "Eternals" and "Spider-Man: No Way Home", while 2022 promises movies centering on Doctor Strange, Thor and Captain Marvel, plus a return to Black Panther’s Wakanda — one which, sadly, will not include the late Chadwick Boseman, who starred as T’Challa in the lauded 2018 movie.

Marvel Studios has not issued any comment at this time.

Salute the new Cap with these movies, all streaming for free on Tubi.

About the writer: Allison Shoemaker is a Chicago-based pop-culture critic and journalist. She is the author of "How TV Can Make You Smarter," and a member of the Television Critics Association and the Chicago Film Critics Association. She is also a producer and co-host for the Podlander Presents network of podcasts. Find her on Twitter and Instagram at @allisonshoe.