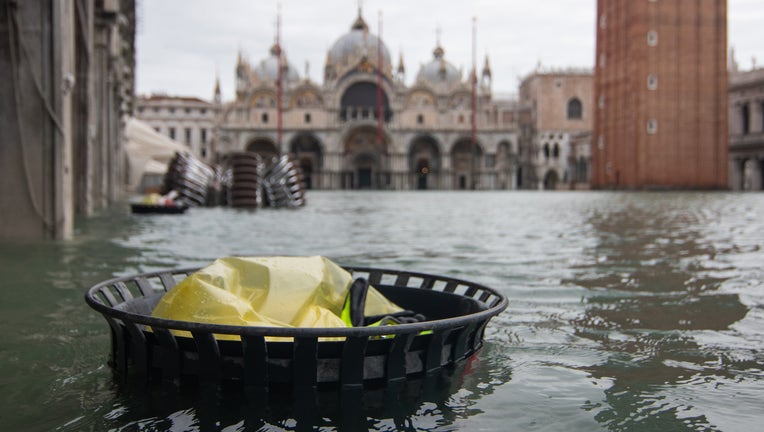 VENICE, Italy (AP) -- Venetians coped with another exceptional tide in a season that is setting records while other parts of Italy wrestled with a cornucopia of weather woes Sunday, from rain-swollen rivers to high winds to an out-of-season avalanche.
Venice city officials shut down St. Mark's Square, removing elevated walkways and turning back curious onlookers. Tourists with scheduled departures rushed to grab the last water taxis to get to the mainland before the service was interrupted by the high tide.
Officials had forecast a 1.6-meter (5 foot, 2 inch) surge of water Sunday through the lagoon city. That fearful prediction came after Tuesday's 1.87-meter flood, the worst in 53 years, followed by high tide of 1.54 meters on Friday.
But bringing Venice a breath of relief, the water on Sunday peaked at 1.5 meters (nearly 5 feet) in the early afternoon.
Still, it was the first time since records began in 1872 that three high tides had hit at least 1.5 meters in the same year -- let alone the same week.
Venice's mayor has put the flooding damage at hundreds of millions of euros and Italian officials have declared a state of emergency for the area.
But tourists continued to arrive, despite the prospects of another day of surging water. Knee-high boots became too short to keep dry and some people who didn't have fisherman's hip waders resorted to tying plastic garbage bags high up on their legs.
Luca D'Acunto and his girlfriend Giovanna Maglietta surveyed the rising water from a bridge, wondering how to make their way to their nearby hotel. They both wore colorful disposable rubber boots that came up only up to their knees.
"We made the reservation this week before the floods and had paid already, so we came," said D'Acunto, a 28-year-old from Naples. "Instead of a romantic trip, we'll have an adventurous one."
As the tide nudged up to above 1.32 meters (4 feet, 4 inches), the doors on St. Mark's Basilica, which has been damaged by the relentless flooding, remained securely shut. The Venetian newspaper, Il Gazzettino, reported that sandbags had been placed in the windows of the crypt to prevent water from flooding in again.
Most museums were closed as a precaution, but the Correr Museum, which overlooks St. Mark's Square and explores the art and history of Venice, remained open. Tourists enjoyed a Venetian Spritz -- a colorful aperitif with an Italian bitter and Prosecco -- as the waters rose.
Officials said 280 civil protection volunteers from throughout the region were deployed in the city to assist as needed.
Young Venetian volunteers wearing rubber boots have also showed up at key sites, including the city's Music Conservatory, to help save precious manuscripts from the invading salt water.
The flooding has raised renewed debates about the city's Moses flood defense project, a corruption-riddled underwater barrier system that is still not operational after more than 16 years of construction and at least 5 billion euros of public funding. It was supposed to be working by 2011.
Floods were also hitting other parts of Italy on Sunday.
In Pisa, workers sandbagged the road along the rising Arno River, which was also surging through the heart of Florence, reaching a level near the Uffizi Galleries that was described as the highest in some 20 years. In 24 hours, 6.26 centimeters (2.5 inches) of rain had fallen in Florence, which was whipped by winds as high as 76 kilometers per hour (42 mph).
A popular Florence tourist attraction, the Boboli Gardens, was closed as a precaution while workers checked to see if the high winds might have weakened trees. Near another Tuscan town, Cecina, 500 people were evacuated when a local river swelled to the top of its banks.
In Italy's mountainous Alto Adige, or South Tyrol region, a mid-autumn snowstorm triggered power outages and blocked roads in several Alpine valleys. The mayor of Val Martello, Georg Altstaetter, told state TV that an avalanche had damaged two houses but caused no injuries. Other homes were evacuated in the town as a precaution, he said.
A windstorm overnight in the Rome area toppled scores of trees, with two falling on cars, severely injuring a motorist, authorities said.