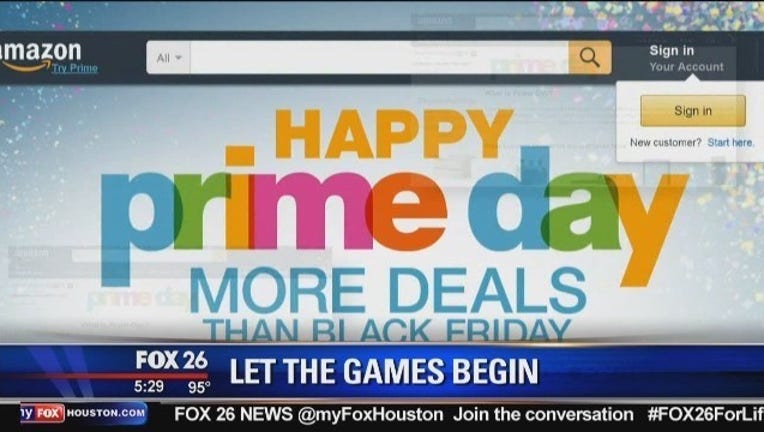 Who doesn’t love a great deal?  Wednesday is Amazon Prime Day, an online sale which is advertised as bigger than Black Friday.  The biggest competition is Walmart and the two retailers are going head to head for your money.  It’s certainly a hot topic all over social media- Amazon Prime versus Walmart.  Ultimately, it boils down to who has the better deals.

Just go to Amazon and you’ll see it everywhere “It’s Prime Day” celebrating 20 years for the online retailer.  It’s created a frenzy some happy shoppers and others claiming it’s a let down.

“The deals are good. There's a lot of good stuff on there. Some people have been a little disappointed, I think they were thinking Black Friday door busters,” Deal Blogger Paul Ivanovsky said/.

One deal was a Kindle Fire for $79 not too bad compared to its original price of close to $100.  These deals are exclusive for members who pay $99 a year.  But is it really bigger than Black Friday?

“Just because they say bigger than Black Friday. You can make statistics say whatever they want.  I think they're talking about the overall numbers of sales not necessarily the door busters which is whatever everybody thinks of when they hear Black Friday,” Ivanovsky said.

Now Walmart’s site shouts thousands of rollbacks and free shipping for deals over $35.  We posted about Amazon Prime versus Walmart on FOX 26 Facebook page.  Trisha wrote: Amazon not a hard question.  Jessica posted “the sale was a joke for Amazon.” And we got a couple of viewers who say neither.  Yet Ivanovsky say the way to get the best deal is to shop around.

"A lot of people also get caught up on I can only do this or I can only do that. Where a lot of times it makes sense to do both. There's things I buy at Amazon and there's things we only buy at Walmart. So you really have to be aware of what you're family uses and don't get up in buying things you don’t need,” Ivanovsky said.

And for more great shopping tips you can find Ivanovsky at www.iheartthemart.com.  You can also take a couponing class with him http://texassmartbuys.com/texas_houston/lists/index.php.