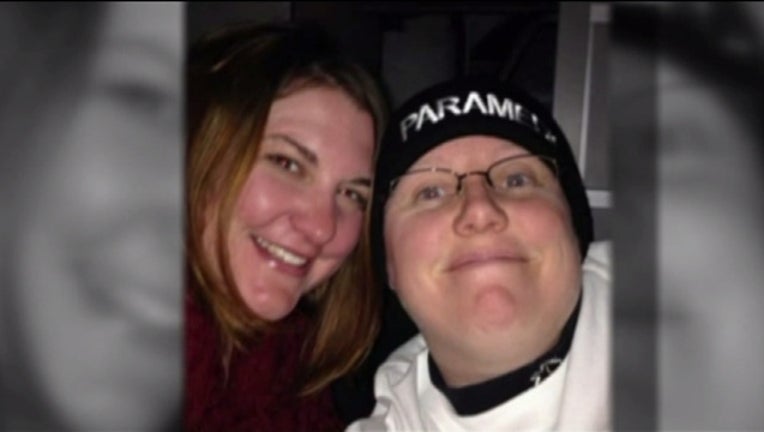 PRICE, Utah (AP) — April Hoagland and Beckie Peirce, a Utah couple who married last year, went to a routine hearing Tuesday expecting to hear an update on how long it would be before they could adopt the baby girl they'd been raising as foster parents for three months.

Instead, they were shocked and devastated when a judge in the central Utah city of Price ordered the child be removed from their home within a week and placed with a heterosexual couple, citing a belief that children are worse off when raised by gay couples.

There were audible gasps in the courtroom, Hoagland said, and outrage echoed around the country this week as national LGBT groups, Utah's Republican governor and Democratic presidential candidate Hillary Rodham Clinton criticized the judge's ruling.

State officials and an attorney for the women filed court documents demanding the judge rescind his decision. Judge Scott Johansen reversed course later in the week but could still order the child removed at a Dec. 4 custody hearing.

"We're just happy we don't have to say goodbye to her on Tuesday," Hoagland told The Associated Press. "That's a big relief."

Hours after finding out they would be able to keep the girl for at least a few more weeks, the couple spoke at a courthouse Friday afternoon in Price, a city two hours southeast of Salt Lake City in scrub-dotted coal country punctuated by low hills and stark buttes.

The couple said they were stunned when Johansen made his initial ruling in court Tuesday, mentioning research that said children raised by heterosexual families do better and that "same-sex marriages have double the rate of instability as heterosexual marriages."

State lawyers countered with evidence to the contrary and asked Johansen to reconsider, but he declined, Hoagland said.

The American Psychological Association has said there's no scientific basis that gay couples are unfit parents based on sexual orientation.

"Obviously, we can prove him wrong because we have two great children at home," said Peirce, who was wearing a T-shirt quoting pioneering gay leader Harvey Milk: "Rights are won only by those who make their voices heard."

References to instability in same-sex marriages were crossed out in Johansen's new order, released Friday. It now says the court merely cited concerns that research has shown children are more emotionally and mentally stable when raised by a mother and father in the same home.

"We all make mistakes as humans. We all have our own opinions. Sometimes they come out in the wrong setting," said Peirce, a paramedic. "I'm not going to guess as to where it came from. I'm just going to be thankful that he decided to fix it."

Hoagland, a stay-at-home mother, and Peirce are among a group of same-sex married couples who were allowed to become foster parents in Utah after last summer's U.S. Supreme Court ruling that made gay marriage legal across the country.

The couple is also raising Peirce's biological children, girls ages 12 and 13. They were worried about what would happen to their girls at school in the small central Utah city with about 8,400 people. Instead, the girls discovered widespread support from their classmates, Hoagland and Peirce said.

They said they want to adopt the 9-month old baby, who wasn't with them Friday as they spoke to reporters.

Ashley Sumner, spokeswoman for the Utah Division of Child and Family Services, said the agency is cautiously optimistic and relieved. But Johansen's decision still leaves open the possibility that he could order the child removed at a Dec. 4 custody hearing, she said.

"We're moving in the right direction, but it's not the final answer," Sumner said.

Jim Hunnicutt, a lawyer for the couple, said he didn't know what caused the judge to change his mind. But Hunnicutt called the initial decision a constitutional violation and harmful to the baby.

"What I have to assume is that when the law was put right in front of his face, he realized that he had made a mistake, and he wanted to correct it and do the right thing and do what was constitutional," he said.

A full transcript of Johansen's initial ruling has not been made public and may not be because court records of cases involving foster children are kept private to protect the kids. Johansen is precluded by judicial rules from discussing pending cases, Utah courts spokeswoman Nancy Volmer has said.

The move to take the baby away also drew a rebuke from Utah Gov. Gary Herbert, who said Thursday that Johansen should follow the law and not inject his personal beliefs into the decision.

The Human Rights Campaign has lodged a formal complaint against the judge to state judicial officials, alleging that Johansen discriminated against the couple based on sexual orientation. The group wants a quick decision ahead of the custody hearing next month.

"It's deeply concerning that any judge would allow his personal bias to interfere with making a determination about what is the true best interest of the child," said Brandon Lorenz of the Human Rights Campaign.

Child welfare officials are working to keep the family together and hope the public outcry sends a strong message to the judge, Sumner said. "We're really happy for this family, and we want to see them stay together," she added.