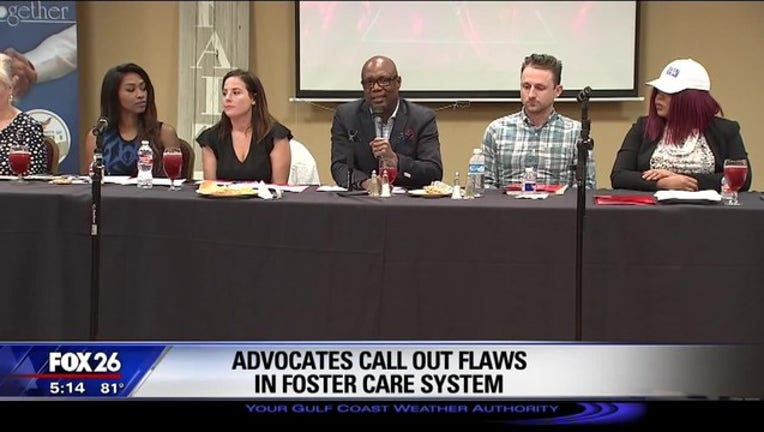 A North Houston church is helping to call out some of the flaws in the Harris County foster care system. Community of Faith Church held the "Love and Justice for Kids Luncheon" Thursday to give a voice to those personally impacted by the system.

Victim advocates and nonprofits gathered to discuss some heavy topics, from the high rate of runaways in the foster care system, to the problem of sex trafficking of foster children, to the lack of oversight, unjust sentencing, and even the incentive to overmedicate children in foster care.

"Everyone around this table has a heart for kids," said Pastor James Dixon, who moderated the discussion.

One of the topics of discussion was the difficulty parents face trying to get their children back once theyve been taken by Child Protecive Services, even if they do everything right.

"Even though parents are doing what's mandated by the court, their children have still been taken by the foster care system, and many of them have been adopted out," said Jacquelyn Aluotto, founder of Real Beauty Real Women Foundation.

One such parent, Jessica Yeager, spoke at the luncheon about her personal experience when her daughter was taken by CPS due to her drug addiction.

"There's no words to describe being separated from your child, especially when you've done everything that was asked of you," said Yeager. "Once my daughter was in CPS custody, I was given a family plan, and at that time there were certain things I needed to do to prove that I was a fit parent."

Advocates say Yeager completed all judge-appointed tasks on time and has been clean for more than three years, but instead of getting her daughter back, Yeager lost all custody. Her daughter was adopted to someone else.

"Jessica followed all the rules," said Aluotto. "If you followed everything court mandated, and there are regulations, then you should get your children back. And if they are adopted out by a judge's personal opinion...these are things that we really need to look into."

Aluotto says her foundation is pushing for legislation that would address cases where parents have completed all court-mandated tasks, and their child custody has still been removed. She is hoping legislation would allow those cases to be re-examined.