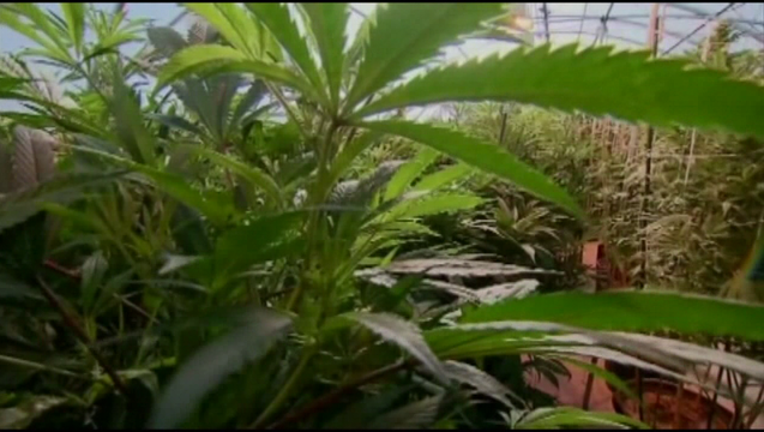 BEND, Ore. (AP) - Dr. Byron Maas surveys a supply of marijuana products for dogs that lines a shelf in his veterinary clinic. They're selling well.

"The 'Up and Moving' is for joints and for pain," he explains. "The 'Calm and Quiet' is for real anxious dogs, to take away that anxiety."

People anxious to relieve suffering in their pets are increasingly turning to oils and powders that contain CBDs, a non-psychoactive component of marijuana. But there's little data on whether they work, or if they have harmful side effects.

That's because Washington has been standing in the way of clinical trials, veterinarians and researchers say. Now, a push is underway to have barriers removed, so both pets and people can benefit.

Those barriers have had more than just a chilling effect.

When the federal Drug Enforcement Administration announced last year that even marijuana extracts with CBD and little or no THC - marijuana's intoxicating component - are an illegal Schedule 1 drug, the University of Pennsylvania halted its clinical trials. Colorado State University is pushing ahead.

The U.S. Food and Drug Administration has warned companies that sell marijuana products online and via pet shops and animal hospitals that they're violating laws by offering "unapproved new animal drugs." The FDA threatened legal action.

But, seeing potential benefits of CBDs, the American Veterinary Medical Association's policy-making body said last summer it wants the DEA to declassify marijuana as a Schedule 1 drug "to facilitate research opportunities for veterinary and human medical uses." It asked the board of the national veterinarians' organization to investigate working with other stakeholders toward that goal. The board is awaiting a recommendation from two group councils.

"The concern our membership has is worry about people extrapolating their own dosages, looking to medicate their pets outside the realm of the medical professional," Board Chairman Michael Whitehair said in a telephone interview. "This is an important reason for us to continue the research."

Utah Sen. Orrin Hatch, a conservative Republican, became an unlikely champion of this push when he introduced a bill in September that would open the path for more clinical research. While Hatch said he opposes recreational marijuana use, he wants marijuana-based drugs, regulated by the FDA, produced for people with disorders.

"We lack the science to support use of medical marijuana products like CBD oils, not because researchers are unwilling to do the work, but because of bureaucratic red tape and over-regulation," Hatch said.

Dawn Boothe, of Auburn University's College of Veterinary Medicine, is waiting for federal approval to begin a study of marijuana's effects on dogs with epilepsy. The classification of marijuana products containing CBD as a Schedule 1 drug, the same category as heroin and LSD, creates a "major, major, major, terrible roadblock" for researchers, Boothe said in a phone interview.

Researchers at the University of Pennsylvania School of Veterinary Medicine were studying CBDs' effects on dogs with osteoarthritis and pruritis, or itchiness, until the DEA released its policy statement.

"The ambiguity in this process has really brought us to a screeching halt," said Michael DiGregorio, director of the university's clinical trials center. "It is research that needs to be done, because there are a lot of CBD products out there."

When it clarified that marijuana CBD extracts are Schedule 1 drugs, the DEA said it was assigning a code number to those substances to better track them and to comply with international drug control treaties.

DiGregorio complained that researchers seeking federal approval to study CBD products are told to provide certain data, but that data isn't normally available until the study is done.

"If you don't have the data, you can't get the registration to do the work," he said.

On a recent morning, Maas took a break from seeing four-legged patients in the Bend Veterinary Clinic. A stethoscope dangling from his neck over green scrubs, Maas said his clients have reported CBDs help relieve pain, arthritis, anxiety, loss of appetite, epilepsy and inflammation in their pets.

"Unfortunately there's not a lot of research out there, especially on animals, on CBD compounds," Maas said. "The research is really necessary to help us understand how to actually use these compounds on our pets."

Veterinarian Janet Ladyga of the Blue Sky Veterinary Clinic, also in Bend, said she doesn't recommend marijuana products because of the unknowns.

"We don't have a lot of evidence right now, so we don't know the toxicity or the safety profile ... and we don't have any good evidence to show either if it's safe or efficacious," she said.

The study at Colorado State University aims to provide some data. The roughly two dozen dogs in the arthritis study and the 30 in the epilepsy tests are given either CBD oil or a placebo. For the arthritis study, activity monitors are attached to the animals' collars, to determine if they're more mobile when they're taking CBD.

Principal investigator Stephanie McGrath said she hopes the results will be a stepping stone for longer and more diverse studies, and that they provide useful information for human medicine.

"Every medication we're taking has been given to a dog first," the University of Pennsylvania's DiGregorio noted.

Meanwhile, Boothe said she had everything ready to start her study in January, and was waiting for a green light from federal officials.

"I don't know what's taking so long," she said.