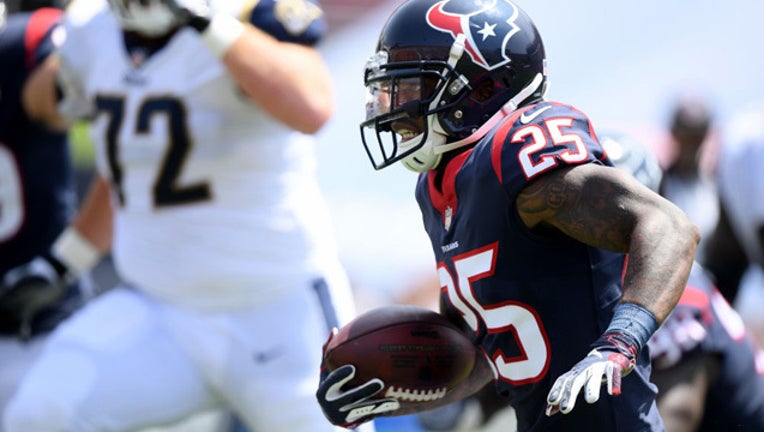 Kareem Jackson #25 of the Houston Texans returns his interception during a preseason game against the Los Angeles Rams at Los Angeles Memorial Coliseum on August 25, 2018 in Los Angeles, California. (Photo by Harry How/Getty Images)

LOS ANGELES (AP) - Rookie John Kelly rushed for 64 yards and two touchdowns, and the Los Angeles Rams briefly debuted their new defensive stars in a 21-20 preseason victory over J.J. Watt and the Houston Texans on Saturday.

Although the Rams rested 10 presumptive offensive starters for the third straight preseason game, the Los Angeles defense's three big offseason acquisitions played at the Coliseum. Ndamukong Suh and cornerbacks Marcus Peters and Aqib Talib got some action early in the first quarter before sitting.

Watt also started and made a tackle in his first on-field action since breaking his leg in the Texans' fifth game last season. The three-time NFL Defensive Player of the Year didn't get to see the current holder of the award, Aaron Donald, who is deep in his second consecutive contract holdout from the Rams.

Alfred Blue rushed for an early score for Houston, and Braxton Miller caught a TD pass from Brandon Weeden, who went 10 of 17 for 108 yards with an interception after Deshaun Watson's brief action. Quan Bray caught a 3-yard touchdown pass from Joe Webb with 5:54 to play for the Texans, but Ejuan Price sacked Webb on the ensuing 2-point conversion attempt.

Nick Rose then missed a 57-yard field goal at the gun. It was the second missed field goal for Rose as the Texans wait for Ka'imi Fairbairn to get healthy.

Kelly, the Rams' sixth-round pick from Tennessee, continued his breakout preseason in Gurley's absence with another impressive game. He finished Los Angeles' 19-play drive that consumed 12:06 of the third quarter with a spinning 15-yard TD run.

Pharoh Cooper caught a TD pass from Sean Mannion, who bounced back from an 0-for-5 start with a bad interception to Kareem Jackson. Mannion finished the first half with 10 consecutive completions, but he has been inconsistent in the preseason, raising some concern about the Rams' backup situation behind Jared Goff.

McVay used his entire starting defense except linebacker Mark Barron, but only for about two series. Suh managed to hit Watson as the quarterback uncorked a long throw that was intercepted by Lamarcus Joyner on the Texans' second series.

Sam Shields made an interception in the veteran cornerback's next huge step in his comeback from multiple concussions. Shields missed most of the past two seasons and was dropped by the Green Bay Packers during his laborious return from at least four recorded concussions. He picked off Weeden's pass late in the first quarter and returned it 13 yards before celebrating on the sideline with teammates who understood the importance of the moment.

There were no apparent protests during the national anthem.

Texans: WR Will Fuller sat out with a minor hamstring injury. ... LB Ben Heeney left the field on a cart during the first half. Houston didn't immediately provide an update on his condition. He has been fighting injuries in training camp.

Rams: DL Ethan Westbrooks had a strong first half before getting shaken up on a play shortly before halftime. He went to the locker room early. ... LB Matt Longacre completed his long comeback from injury by starting for Los Angeles. He hurt his back late last season and then struggled with a biceps injury in training camp.

Texans: Finish the preseason at home against the Dallas Cowboys on Thursday.

Rams: Finish the preseason at the New Orleans Saints on Thursday.