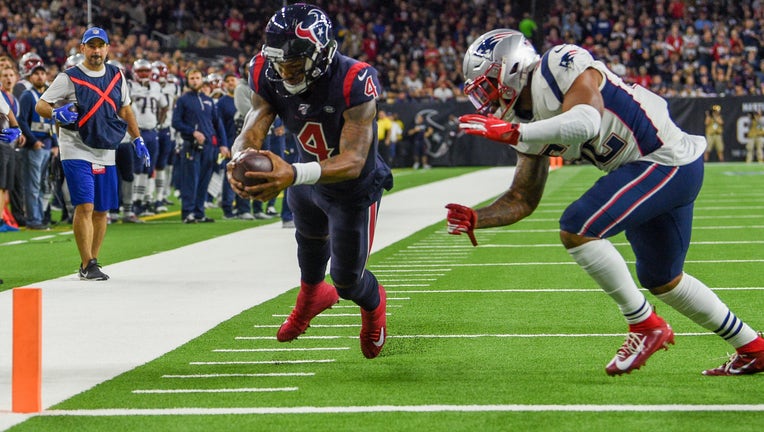 HOUSTON, TX - DECEMBER 01: Houston Texans quarterback Deshaun Watson (4) dives for the endzone to score a second half rushing touchdown during the football game between the New England Patriots and Houston Texans at NRG Stadium on December 1, 2019 in ( Photo by Ken Murray/Icon Sportswire via Getty Images )

HOUSTON - Deshaun Watson has long admired Tom Brady for his talent and resilience.

He beat him Sunday night by not only throwing touchdown passes, but by catching one, too.

Watson threw three touchdown passes and had the first TD reception of his career, and the Houston Texans frustrated Brady in a 28-22 victory over the New England Patriots.

Texans coach and former Patriots assistant Bill O'Brien got his first win in six tries against New England coach Bill Belichick. It was Houston's second win over the Patriots and first since Jan. 3, 2010.

"This is pretty big just because it's Brady," Watson said. "I was 0-2 against him and who knows when he's going to hang it up. That's my role model, a guy that's been doing it forever, over 20 years ... so it's pretty awesome to finally get one."

Brady completed two of his three TD passes in the final 4 minutes to pull within six. A Patriots (10-2) player got a hand on Jake Bailey's onside kick attempt with 50 seconds remaining, but the ball bounced out of bounds.

"There's really not a whole lot to say here," Belichick said. "The Texans did a good job tonight, across the board, in every area. They were just better than we were."

James White had a 12-yard reception for New England's first touchdown late in the third quarter, but Watson grabbed the first reception of his career on a flip from DeAndre Hopkins on a trick play with about 10 minutes left to make it 28-9. Watson took the snap and handed off to Duke Johnson, and he gave the ball to Hopkins on a reverse to the right. Hopkins tossed to Watson on an option near the sideline, and Watson dived into the end zone for a 6-yard score.

The Patriots entered needing a win to be the first AFC team to clinch a playoff spot after Oakland's loss to Kansas City earlier in the day. Instead, they struggled to sustain drives, and Brady often looked upset on a night he was 24 of 47. He threw an interception and was sacked three times, hit on 12 other occasions and was seen yelling at his receivers on the sideline after a drive with several incompletions in the first half. He finished with 326 yards.

"Execution," Brady said. "Just got to do a better job, and it's tough to get behind and come back. Just put ourselves in a pretty deep hole and you can't do that on the road."

New England dealt with a flu bug this week that swept through the locker room and left two players inactive Sunday.

Brady connected with White again with about four minutes left, but the 2-point conversion failed to leave New England down 28-15. The Patriots attempted an onside kick after that and Houston recovered but couldn't move the ball and had to punt.

Brady threw a 20-yard pass to Julian Edelman that cut the lead to six with 50 seconds left. But the Patriots couldn't recover a second onside kick and Houston ran out the clock.

There were about seven minutes left in the third quarter when the Patriots went for it on fourth-and-1 and Johnathan Joseph broke up a pass intended for Mohamed Sanu.

On the next drive, Houston had a touchdown reception by Will Fuller called back after a review. It didn't matter much as the Texans got a 35-yard TD on a nearly identical route by Kenny Stills on the next play to push the lead to 21-3.

New England was able to sustain a drive for the first time since its opening possession when White grabbed his 12-yard TD from Brady late in the third. Kai Forbath missed the extra point to leave the Patriots down 21-9. Forbath was signed on Friday to replace Nick Folk, who was released after having an emergency appendectomy.

The Patriots led 3-0 after a field goal on their first drive. The Texans had to punt on their first possession but got the ball back three plays later when Bradley Roby jumped a route and intercepted Brady. Roby, who also had a sack, returned after missing the last five games with a hamstring injury.

Houston cashed in on the miscue when Watson connected with Johnson on a 14-yard TD pass to make it 7-3 late in the first quarter. It is Watson's fifth game this season with at least three touchdown passes, which is tied for most in the NFL.

The Texans padded the lead when they capped a 13-play, 88-yard drive with a 13-yard touchdown reception by Darren Fells.

Texans: RB Taiwan Jones left in the third quarter with a hamstring injury and didn't return.

Hopkins had previously attempted two passes in his career -- an interception and an incompletion. He was feeling pretty good about himself after his TD toss to Watson and had this to say when asked to rate himself as a QB.

Watson has 21 touchdowns and just three interceptions in eight night games in his career.