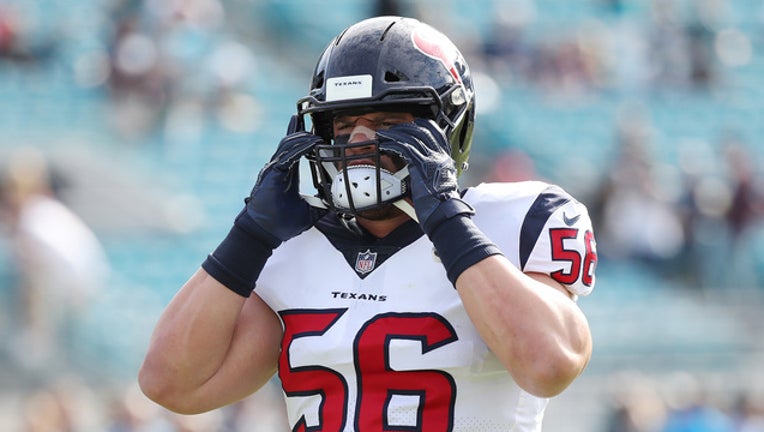 Brian Cushing #56 of the Houston Texans warms up on the field prior to the start of their game against the Jacksonville Jaguars at EverBank Field on December 17, 2017 in Jacksonville, Florida. (Photo by Logan Bowles/Getty Images)

HOUSTON - Linebacker Brian Cushing, the 2009 Associated Press Defensive Rookie of the Year, has been told by the Texans he will not return to the team in 2018.

Cushing, the Texans all-time leading tackler with 664, will be released prior to the beginning of 2018 free agency, which is March 14.

The move will save the Texans $7.64 million on the salary cap.

In a text message to FOX 26 Sports Brian Cushing said: "It's all good man and part of the business."

He was selected to play in the Pro Bowl following the 2009 season, but did not play because of injuries.

He had to serve a four-game suspension in 2010, also for violating the league’s policy on substance abuse.

Cushing played and started in 104 games for the Texans, having to undergo more than 20 surgeries to stay on the field.

He has eight career interceptions, returning one for a touchdown.

A fan favorite, Cushing played in five of the Texans seven postseason games.