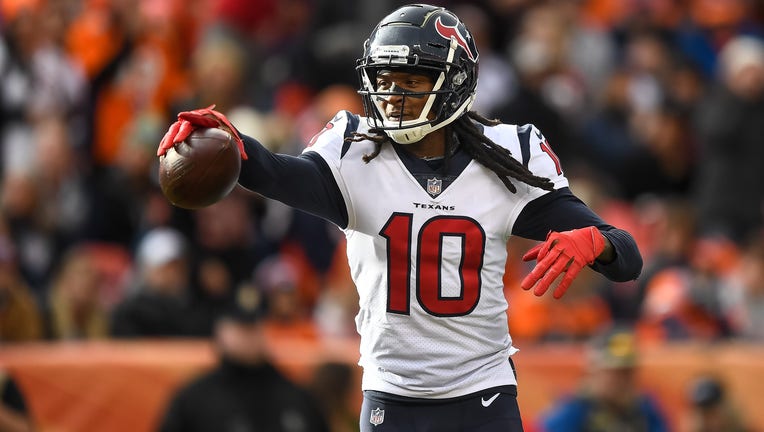 DENVER, CO - NOVEMBER 4: Wide receiver DeAndre Hopkins #10 of the Houston Texans celebrates a second quarter touchdown catch during a game against the Denver Broncos at Broncos Stadium at Mile High on November 4, 2018 in Denver, Colorado. (Photo by D

HOUSTON - Three-time All-Pro receiver DeAndre Hopkins leaves Houston thankful for what he has accomplished, the man he has become and with "love" in his heart for the fans who supported him during his seven-year career with the Texans.

The trade cannot become official until the beginning of the league's new year on Wednesday.

“I would like to say Houston helped create not just a football player, but a man," Hopkins said in an interview with FOX 26 Sports. "Houston gave me opportunities in life that I would have never got in a lot of places to better myself. I want to thank the city of Houston for always supporting the organization, no matter what happened and supporting us players through the ups and downs.

"Houston, always know there will be love in my heart despite this situation...It’s a business and there’s nothing personal about it. I gave it all I had..I wouldn’t take anything back. I don’t regret anything that’s happened so far in my career being a Houston Texan.

"Now it’s a new chapter in my life I’m looking forward to & very excited to be part of the Arizona Cardinals. All of the Houston fans that loved DeAndre Hopkins, make sure they still support DeAndre Hopkins.”

A first-round pick in 2013, Hopkins had a brilliant career with the Texans, which included being selected for the Pro Bowl four times.

He's tied for the second-most receptions (632) by a player through his first seven seasons in NFL history with Antonio brown, behind Marvin Harrison who had 665.

Hopkins is the second-youngest player in NFL history to reach 600-career receptions, trailing only Larry Fitzgerald.

Hopkins led the NFL in touchdown receptions in 2017 with 13.

In 2016 David Johnson had a breakout year during his second season in the NFL when he was named First-Team All-Pro after rushing for 1239 yards and 16 touchdowns.

Injuries caused him to miss all but one game the following year.

Since then he has rushed for 940 yards and seven touchdowns in 2018 and 345 yards and two touchdowns last year.

Johnson is also a solid receiver out of the backfield, with 208-career catches for 2219 yards and 15 touchdowns.