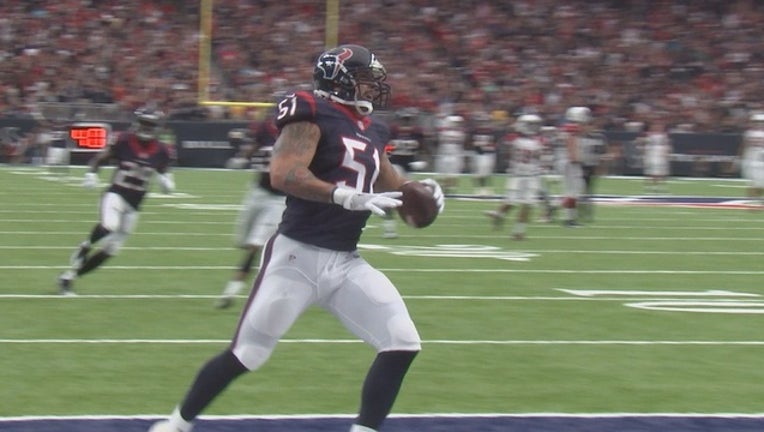 HOUSTON (AP) — Brock Osweiler threw for 146 yards and a touchdown and Houston intercepted two of Carson Palmer's passes in the Texans' 34-24 exhibition victory over the Arizona Cardinals on Sunday.

Osweiler led the Texans to scores on three of his four drives. He connected with first-round pick Will Fuller on a 26-yard touchdown pass that extended Houston's lead to 24-10 before sitting down with about three minutes left in the first half.

It was Osweiler's second successful outing after he and Houston's starting offense struggled in the team's first preseason game. The expectations for Osweiler are high after the Texans signed Peyton Manning's former backup to a $72 million contract this offseason.

Palmer's second drive was his only clean one, and it ended with a 3-yard touchdown run by David Johnson.

On Arizona's next possession, linebacker John Simon tipped a pass by Palmer, intercepted it and returned it 59 yards for a touchdown. It was the second straight game in which Palmer had an interception returned for a touchdown after Brandon Flowers did it in last week in a 9-3 loss at San Diego.

Palmer attempted to tackle Simon after the interception and was tackled by 305-pound defensive end Devon Still, a hit that knocked the quarterback's helmet off. Coach Bruce Arians had seen enough after that hit, and Palmer was replaced by Drew Stanton.

Fuller finished with 67 yards receiving and fellow rookie Braxton Miller, the former Ohio State star quarterback, added three receptions for 29 yards. The Texans chose Fuller in the first round this year to take pressure off Pro Bowler DeAndre Hopkins, who was third in the NFL with 1,521 yards receiving last season despite facing near constant double teams.

He had two receptions for 31 yards on Sunday.

Cardinals: CB Mike Jenkins, who had recently returned after having surgery to repair a broken bone in his right hand, was carted off the field after injuring his right knee in the first quarter. He was injured when he was juked by Hopkins and immediately crumpled to the ground. He appeared to be in a lot of pain as he was helped to the cart, and slammed his right hand on the cart in disgust before he was taken to the locker room.

All-Pro safety Tyrann Mathieu, who came off the physically unable to perform list last week after knee surgery, was expected to play on Sunday, but remained on the sideline in a T-shirt and shorts.

Texans: K Nick Novak returned after sitting out most of the week after getting a concussion against the Saints last week. He made a 44-yard field goal in the first quarter and added one from 42 yards in the fourth.

Outside linebacker Jadeveon Clowney had three tackles and put pressure on Palmer and Stanton often on Sunday, leading Houston's defense with Defensive Player of the Year J.J. Watt still out after back surgery. The performance comes a week after Clowney sacked Drew Brees for a 14-yard loss in a win over the Saints. The top overall pick in the 2014 draft is looking for a breakout year after failing to produce in his first two injury-plagued seasons.

Cardinals: Jenkins had been among three players the mix to start at cornerback opposite star Patrick Peterson. If his injury is as severe as it appears, Arians will now have just Brandon Williams and Justin Bethel as candidates for the job.

Texans: C Greg Mancz started at center on Sunday in the position left open when rookie second-round pick Nick Martin had season-ending ankle surgery this week. But he struggled with some protections on Sunday, leaving open the possibility that offseason free agent acquisition Tony Bergstrom could get another shot at the job.

Texans: Fourth-round pick Tyler Ervin looks to have solidified his position as the team's kick returner after returning one for 58 yards on Sunday. Irvin also had two carries for 13 yards and a 20-yard reception.