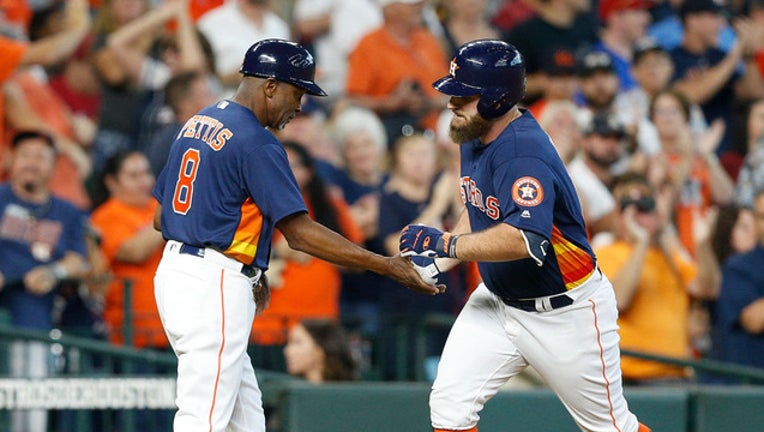 Tyler White #13 of the Houston Astros receives congratulations from third base coach Gary Pettis #8 after hitting a home run in the second inning against the Texas Rangers at Minute Maid Park on July 29, 2018. (Photo by Bob Levey/Getty Images)

HOUSTON (AP) - Jurickson Profar hit a go-ahead double deflected by the pitcher and stayed in despite getting kicked in the face as the Texas Rangers became the first team to sweep Houston this year, beating the Astros 4-3 Sunday.

Texas took three in a row from the AL West leaders and extended the Astros' skid to a season-high four games.

The last-place Rangers won even though they struck out 19 times - the most Houston pitchers have recorded in a nine-inning game in franchise history.

It was 1-all in the sixth when Rougned Odor doubled and Profar hit a grounder nicked by Lance McCullers (10-6) that rolled into the outfield. Astros second baseman Yuli Gurriel lost his balance and kicked Profar in the cheek with his cleats as he slid into second base.

Profar was bleeding from cuts to his face and left the field briefly before returning with a bandage covering the injury. He advanced to third on a wild pitch with two outs before scoring when Isiah Kiner-Falefa reached on error by Gurriel.

Gurriel made his first career start at second base a day after reigning MVP Jose Altuve went on the disabled list for the first time in his career with a sore knee.

The Rangers pushed the lead to 4-1 on an RBI double by Ronald Guzman that chased McCullers.

Mike Minor (7-6) allowed four hits and two runs while striking out eight in six innings for his first win since June 27. Keone Kela allowed a run in the ninth before retiring George Springer with two on to get his 24th save.

McCullers yielded six hits and four runs - three earned - and struck out 11 in 5 1/3 innings to lose his third straight start.

Tyler White, recalled from Triple-A Fresno before the game, put Houston up 1-0 with two outs in the second with a home run.

McCullers retired the first 11 batters he faced, fanning six, before Profar singled with two outs in the fourth inning. Delino DeShields hit an RBI double in the fifth that tied it at 1.

Astros: SS Carlos Correa (back soreness) took groundballs on the field before the game and will travel with the team to Seattle to continue to ramp up his activity as he moves closer to a rehabilitation assignment.

Rangers: Martin Perez (2-4, 7.08 ERA) is scheduled to start for Texas on Monday in the opener of a two-game interleague series at Arizona. Perez allowed seven hits and one run in six innings in his last start against Oakland but did not factor in the decision.

Astros: Gerrit Cole (10-2, 2.54) will pitch for Houston on Monday when the team opens a three-game series against the Mariners. Cole ranks fourth in the American League with 186 strikeouts.