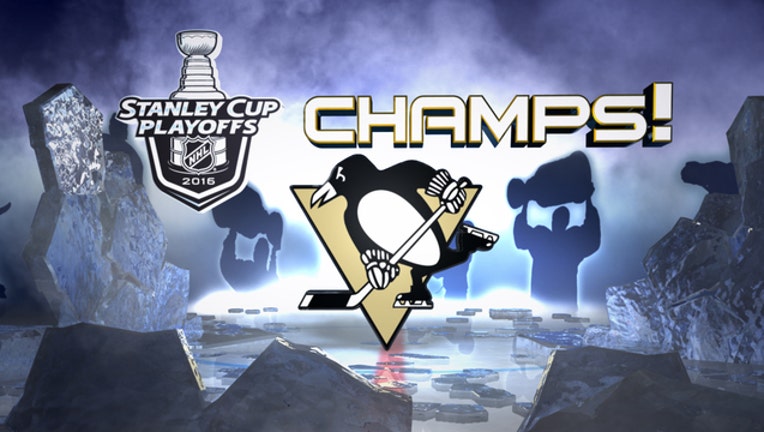 SAN JOSE, Calif. (AP) - Back in December, the Pittsburgh Penguins looked like a lost team bound to miss the playoffs.

Sidney Crosby and the offense couldn't score, the offseason acquisitions such as Phil Kessel and Nick Bonino had yet to click and coach Mike Johnston was fired.

Six months to the day after coach Mike Sullivan took over, the Penguins are champions again.

Led by Crosby's dominant play on both ends of the ice, speed that opponents struggled to match and a rookie goaltender who showed an uncanny ability to bounce back from rare shaky performances, the Penguins won their second title of the Crosby era — seven years to the day after last holding the Cup.

"I have a greater appreciation this time around," Crosby said. "At a young age, going back-to-back like we did, you just think it's going to be an annual thing. With the core we have, you think everyone's going to stay together, the team's not going to change. But it does. That's kind of the reality of playing hockey."

The turnover this season was a major reason for the turnaround in fortunes after six straight years of playoff disappointments.

General manager Jim Rutherford acquired the entire "HBK line" of Carl Hagelin, Nick Bonino and Phil Kessel over the past 12 months, Matt Murray stepped in as goalie when starter Marc-Andre Fleury got hurt and rookies such as Conor Sheary and Bryan Rust delivered clutch playoff performances.

Throw in mainstays such as Evgeni Malkin and Kris Letang and the Penguins had the right ingredients to win it all.

But it all starts with Crosby, who set up Letang's game-winner midway through the second period and Patric Hornqvist's empty-netter that sealed the 3-1 victory over the San Jose Sharks on Sunday night that gave Pittsburgh its fourth title.

Despite not scoring a goal in the final, Crosby controlled the play with his committed defense, strong performance in the faceoff circle and playmaking ability that earned him the Conn Smythe trophy as playoff MVP.

"It places him up there with the greats of the game of all-time," Sullivan said. "He's that good in my mind. I've said all along here through the course of the playoffs, he's deserving of the Conn Smythe. His numbers don't indicate the impact he had on helping this team win, or the impact he had on a game-to-game basis. He was a great leader for our team."

Three nights after squandering a chance to become the first Pittsburgh team to win a title in front of the home fans in 56 years, the Penguins finished the job on the road just like they did in Minnesota (1991), Chicago (1992) and Detroit (2009) in past title runs.

The championship in Detroit was supposed to be the first of many for a team led by players like Crosby and Malkin. But a series of concussions cost Crosby almost an entire season and a half, and there were those playoff disappointments that included twice blowing 3-1 series leads. There was no second celebration in the Crosby era — until now.

"It's so hard to win it year after year," said Lemieux, who won back-to-back titles and Conn Smythe trophies as a player for Pittsburgh. "For them to be able to come through this year and win their second Cup is big. Hopefully there's a few more for them."

This didn't seem as though it would be a season to remember back in early December. But the Penguins found their stride under Sullivan and took off in March.

"Everyone takes that personal, puts the responsibility on their shoulders to be better," Crosby said. "I think individually and as a group we had high expectations, we knew we needed to be better. I thought we just slowly got better and better."

Pittsburgh knocked off the New York Rangers in the first round, Presidents' Trophy-winning Washington in round two and then rallied from a 3-2 series deficit to beat Tampa Bay in the Eastern Conference final.

The Penguins were in control for almost the entire final. They did not trail until Game 5 at home and responded to a strong push from San Jose in the clincher to avoid a decisive seventh game. Pittsburgh held San Jose to just one shot on goal in the first 19 minutes of the third period to preserve the one-goal lead. The Penguins sealed it when Crosby blocked a shot from Marc-Edouard Vlasic that set up Hornqvist's empty-netter.

"In the playoffs, suddenly we thought we could beat any team," Malkin said. "We tried to play the same game we played in 2009."

Logan Couture scored the lone goal for the Sharks, who were making their first trip to the final in their 25-year history. Martin Jones made 24 saves and was San Jose's best player for the series.

"The end is like hitting a wall," coach Peter DeBoer said.

While the season ended in disappointment, it also was a bit of a breakthrough for Joe Thornton, Patrick Marleau and the rest of a franchise that had been known for playoff collapses, most notably in 2014 when the Sharks blew a 3-0 series lead in the first round to Los Angeles.

"We thought we had the team, going through the teams we did in the West," Thornton said. "It's just tough right now."