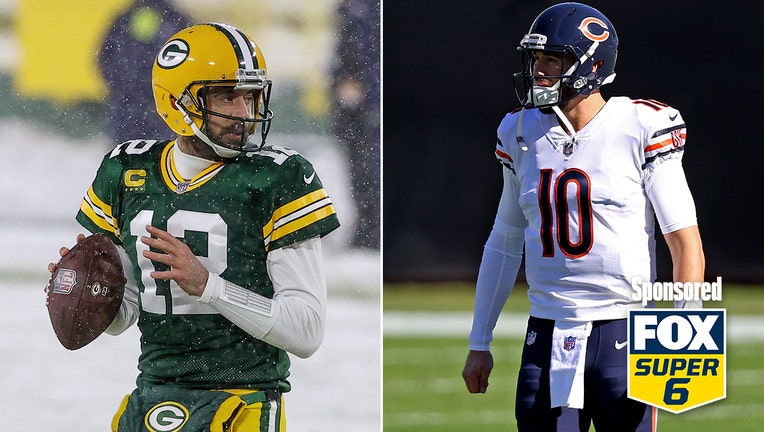 LEFT: Aaron Rodgers #12 of the Green Bay Packers drops back to pass in the first quarter against the Tennessee Titans at Lambeau Field on December 27, 2020 in Green Bay, Wisconsin. (Photo by Dylan Buell/Getty Images) RIGHT: Mitchell Trubisky #10 of t

The 2020 NFL season reaches its regular season crescendo this week with playoff spots up for grabs all over the place in the 16-game all-Sunday schedule. And the biggest games could win you some really big money with FOXBet’s Super 6 jackpot.

This week, you could win the $100,000 jackpot if you could match the winners of all six games and the correct margins in the Super 6 contest. (The jackpot will be split among all those who get every game and margin of victory correct.)

The best part of all is it’s free. To play, all you have to do is go to the Fox Super 6 app on your phone or tablet device. When you click on the app, you will see the entry for the NFL Sunday Challenge. Just go onto the app, swipe for the team that you think will win and the margin of victory.

Here’s the six games to pick for this coming week.

Both teams are still alive in the NFC East race coming in, but only one will remain and wait around to see if Washington trips up down I-95 against the eliminated Eagles. The Cowboys offense has clicked into gear over the last three weeks as Andy Dalton has generated life into the passing game with Amari Cooper, Michael Gallup and CeeDee Lamb all making a bigger presence. Meanwhile, the Giants haven’t been the same since going to Seattle and stunning the Seahawks three weeks ago. The limitations of Daniel Jones have been on full display with hamstring and calf problems. New York, however, does own a tiebreaker against Washington thanks to two wins in a row. So if they win and the Football Team loses, a 6-10 Giants team will make the playoffs from the bizarre NFC East.

Make your pick on this classic NFC East rivalry on the FOX Super 6 for free and it could lead to $100,000. Play today.

The Bucs are into the playoffs for the first time since 2007 after blowing out the Lions on Saturday in Detroit. In reality, Tampa Bay has one motivation- they could finish as the five seed and play the NFC East champion if they win. Otherwise, it could be a trip to Seattle for the first round. That lead Tampa coach Bruce Ariens to say that he will play his starters – at least for a little while- on Sunday. (Don’t be surprise if Tom Brady, Rob Gronkowski and the wide receiver corps take a second half seat, however.) Meanwhile, Atlanta pushed Kansas City to the brink on Sunday before falling 17-14. The final game before massive changes in Atlanta could mean Matt Ryan’s Falcons swan song as well.

Who wins this matchup? With Fox Super 6, you could pick the winner of six NFL games and take a crack at big cash prizes. Download the app today.

Both teams are heading home after this one to off-seasons filled with uncertainty. The Vikings were beat by Alvin Kamara’s six touchdown Christmas Day performance to get stamped out of the tournament. Head coach Mike Zimmer could be on the hot seat after a disappointing campaign in Minneapolis, which could see some questions about Kirk Cousins status moving forward. Meanwhile, the Lions have already fired head coach Matt Patricia and general manager Bob Quinn with speculation starting about the status of quarterback Matthew Stafford, who could miss this game with multiple injuries that saw him knocked out in the first quarter of the loss to Tampa Bay last week. Chase Daniel would get the start if that happened.

With Fox Super 6, you can bet and take a shot at great prizes. If you win all six games, you can win $100,000. Download the app at the App Store or Google Play.

If the Dolphins win, Miami will make the playoffs for just the third time since 2001 as one of the AFC Wild Cards. If the Bills win, they could be the No. 2 seed in the AFC Tournament and set up a possible rematch the following week between the two teams depending on how things shake out. The Bills are coming off a blowout win over the Patriots on Monday night to post their first 12 win season since 1993. Meanwhile, the biggest question about Miami coming into this one will be how quick will head coach Brian Flores turn to backup quarterback Ryan Fitzpatrick should the Dolphins fall behind? Fitzpatrick’s magic was in full display in Las Vegas last week, replacing Tua Tagovailoa and throwing for 182 yards in a miraculous 26-25 win over the Raiders. The hook could be short for Tagovailoa, who hasn’t shown the ability to stretch the field with his arm just yet.

It’s a big game for both teams and it could be a huge game for you on the Fox Super 6 app. If you pick that game and five others correctly, you could win $500,000. It’s free to play, so download today at the App Store or Google Play.

A lot of juice for this last week of the season game was ripped away from 2:30 to 4:30 on Sunday afternoon. The Steelers 28-24 comeback over the Colts meant that Pittsburgh would win the AFC North and Cleveland shot at the title was gone. Now, the Browns need to rebound from a lackluster 23-16 loss to the New York Jets that saw Baker Mayfield turn the ball over three times in order to make the playoffs for just the second time since returning in 1999. Cleveland is in with a win and likely out with a loss. The Steelers could still find their way to the second seed in the AFC, but rest may become a priority if things get out of hand either way early.

You want intrigue? The Packers will secure the only NFC bye in the playoffs and force everyone to go through Lambeau Field on their way to Tampa Bay and the Super Bowl with a victory. The Bears will get into the tournament and knock Green Bay into a first round rematch in Wisconsin next week with a victory themselves. Aaron Rodgers has this final chance to impress MVP voters who have been wrestling with the idea of whether he or Patrick Mahomes should get the league’s top honor. Meanwhile, Bears QB Mitchell Trubisky looks reborn, throwing for two touchdowns and 265 yards on Sunday in a 41-17 win over Jacksonville.

With Fox Super 6, you can pick the winner and take a shot at potentially $100,000 in prizes while playing for free. Download the Super 6 app on App Store or Google Play.

No purchase necessary. Open to legal residents of the US, excluding WA. 18 and older. See terms and conditions at foxsuper6.com. Sweepstakes and Prize Sponsored by TSG Interactive US Services Limited.