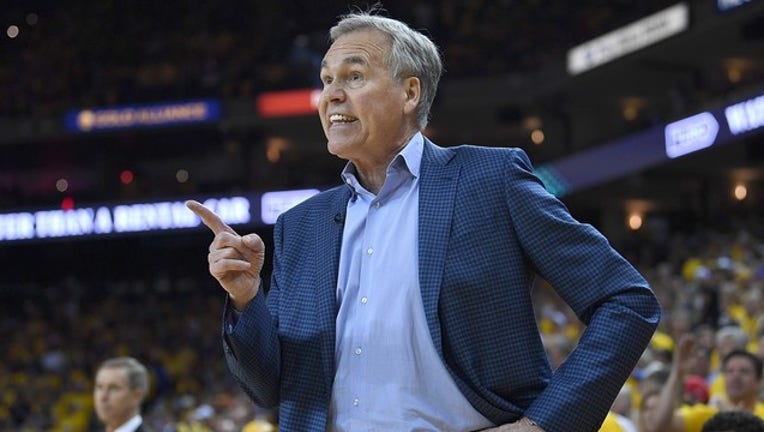 HOUSTON - Rockets coach Mike D’Antoni said negotiations are taking place that he is hopeful will keep him in Houston beyond next season.

D’Antoni has one year left on his Rockets deal.

“We’ve been in contract discussions and we still are about the extension,” D’Antoni said in an interview with FOX 26 Sports. “I think I can go two or three more years at the level I want to be at and everything will play out in the near future.”

D’Antoni said a lot of work has already been done toward completing a contract extension.

“It’s a good ways (into it). I don’t do it. That’s my agent. He takes care of that stuff. They’ve been discussing it for a long time now. It just hasn’t been a couple weeks. It’s been awhile that they’ve been talking. So they’ll figure it out.

“Everybody likes security. It’s just a matter of okay this is the direction the organization wants to go. I want to be a part of it. It’s just normal business and we just got to take care of business.”

ESPN was the first to report D’Antoni and the Rockets are negotiating an extension.

The Rockets did not reach their goal of winning the NBA championship, but D’Antoni believes they had a good season, given the issues they had to overcome early on.

“Starting the year we struggled,” D’Antoni said. “We struggled out of the gate. Combination of a lot of things. The team was trying to find its footing. We had a few injuries, a suspension and different things that just didn’t go right.

“Ran up against a really good team, that’s got that championship caliber. They made the big plays at the right time. We didn’t. Disappointing for everybody, but at the same time proud of what the guys got accomplished. Time to retool a little bit this summer and figure out how to climb the mountain again.”

Next up for the Rockets is what it will take to take the next step.

“Sometimes it’s just keep being persistent and keep just tweaking things and getting a little bit better and having guys experience defeat and having that desire to do better. You can’t just point to one thing. I’m sure (general manager) Daryl (Morey) is going to tweak the roster. He’s going to try to get it better. We’ll tweak some things we do coaching-wise and try to get it better and go from there.”

D’Antoni believes the style of play he coaches is good enough to get the job done. The Rockets just have to do a better job with what they have.

“We think that, for 90% of it ,” D’Antoni said. “Now every year is different. You have different players, different roles. You have different things you need to tweak and get it right. For three years we’ve averaged 58 wins. I think that was the team record before we got here and we’ve averaged that for three years. We’re in a very good spot. We’ll tweak it and try to get that little half step better and I think we can do it.”

D’Antoni’s staff will have a different look next season.

“That’s the hard part because you develop such close relationships. I thought Jeff and everybody under him did a great job,” D’Antoni said. “You’d have to ask Daryl about the reasoning (concerning Bzdelik)  and all that behind it, but there are some great coaches out there. We’ll try to do the best we can to bring someone in that may be a different voice, maybe a different slant on things and you hope we can do a good job. Like I said, Jeff did a great job, but we’ll tackle it.”

D’Antoni was very surprised by a recent report from The Athletic about Harden and Paul having a verbal disagreement during the game six loss to Golden State that spilled into the locker room after the game.

“It was definitely blown out of proportion,” D’Antoni said. “Those are discussions that (happen with) every good team that has a lot of alpha dogs and we do. Those are things that (happen) in the locker room and on the floor, time outs and everybody’s trying to compete and win a championship. That happens all the time.   So it was nothing out of the ordinary at all. It kind of took me a little bit by surprise. I was shocked. Just wow, okay, it just didn’t happen.”

D’Antoni is thrilled James Harden was a unanimous selection for All-NBA First Team.

“He deserves it,” D’Antoni said. “There’s no one that had a better year than James, in the last three or four years. We had some serious injuries for a long time and he was able to carry the team on his back. To do more than what he’s done is impossible. Just another unbelievable MVP-type year.”

At the same time D’Antoni is disappointed P.J. Tucker did not receive the recognition he deserves that goes with making one of the NBA All-Defensive teams.

“He should have made it last year,” D’Antoni said. “Not a great system on voting. He definitely deserves to be on there. I’m sure there’s other guys that deserve to be on there. That’s just the way it goes. It’s too bad. Disappointed for PJ. (He had a) great year. He’s a key to what we try to do.”