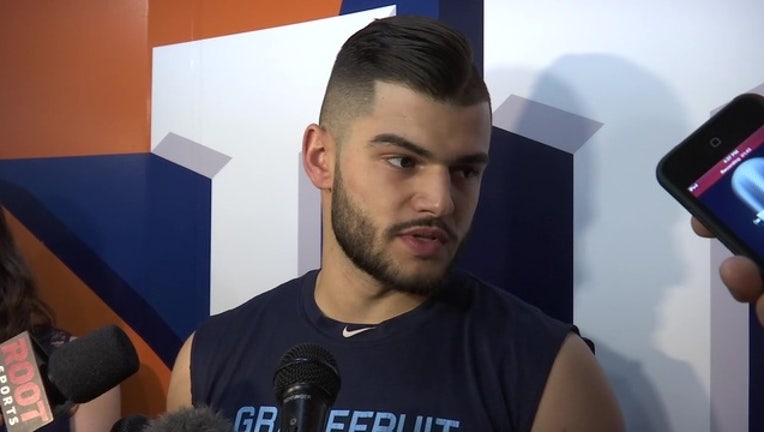 HOUSTON (AP) - With the lineup the Houston Astros have, Lance McCullers wasn't too concerned when he gave up three runs in the first two innings on Sunday.

He was right not to be worried, and it didn't take long for Houston to turn things around.

George Springer homered during a six-run second inning, sending McCullers and the Astros over Baltimore 8-4 for the Orioles' season-worst seventh straight loss.

Springer connected for the second straight game , helping the Astros overcome a 3-0 deficit against Alec Asher (1-3).

"Three runs, I feel like our team is pretty much going to score that every time," McCullers said. "Not an ideal start ... (but) you just say to yourself got to keep it here and let the guys go to work and they did."

McCullers' streak of 22 scoreless innings ended when Schoop hit a two-run homer in the first.

Schoop drove in three runs and Mark Trumbo added a solo homer for the Orioles, who have been outscored 38-17 during their skid.

"It's very easy to get into a lackluster game where we've already won the series, we've already come back from the start of the homestand being poor, but our guys came out with an explosive inning," manager A.J. Hinch said. "Huge to see and not just to pick up Lance, but to continue to play pretty exceptional baseball."

The Astros have won six of seven since being swept by the Indians to start the homestand to move a season-high 19 games over .500 at 35-16.

Marwin Gonzalez hit a two-run double with one out in the Houston second inning and scored on a double by Yuli Gurriel to tie it at 3.

Springer for his 11th homer with two outs. Asher watched the ball sail over him and put his hands on his knees and shook his head as Springer rounded the bases.

"You start falling behind hitters like the caliber of that team and you get in trouble," Asher said. "Just one thing after another and you find yourself giving up a couple of runs and it's tough to get out of it."

Josh Reddick followed with a triple and scored on a single by Jose Altuve to push the lead to 6-3. Asher finally got the third out when Carlos Correa hit a grounder in his second at-bat of the inning.

Asher gave up six hits in two innings in his first start since replacing struggling right-hander Ubaldo Jimenez in the rotation. Jimenez, who had a 7.17 ERA in nine games entering Sunday, allowed five hits and two runs in six innings after Asher's early exit.

Up 2-0, the Orioles the bases with one out in the second on a single by Hyun Soo Kim and two errors. Schoop's single with two outs pushed the lead to 3-0 before McCullers retired Manny Machado to limit the damage.

Orioles: CF Adam Jones was out of the lineup for a second straight game because of a sore hip. But manager Buck Showalter said he was feeling better and that he expects him to return on Monday.

Astros: Put RHP Charlie Morton on the 10-day disabled list with a strained muscle in the right side of his back and Hinch said there is no timetable for his return. Mike Fiers, who was moved into the bullpen on Saturday in favor of Brad Peacock, will return to the rotation to make Morton's scheduled start on Tuesday at Minnesota.

Gonzalez had two hits on Sunday and has reached base safely in 21 straight starts. Houston's super utility player has been great this month, hitting an American League-best .381 to improve to .299 overall this season. His 30 RBIs lead the team and his 11 homers are tied with Springer for first.

Jimenez on pitching well out of the bullpen after struggling as a starter this season: "''It's always good to finally have a good one. Finally do something for the team, especially when they needed me. I was able to help the bullpen so it feels good."

Orioles: Dylan Bundy (5-3, 2.92 ERA) is scheduled to start for Baltimore on Monday in the opener of a series against the Yankees. He allowed six hits and two runs in seven innings of a 2-0 loss to the Twins in his last start.

Astros: Brad Peacock (2-0, 0.87) will make his second start of the season on Monday when Houston opens a three-game series at Minnesota. Peacock allowed one hit and no runs while striking out eight in 4 1/3 innings of his last start when he filled in when Dallas Keuchel missed one start with a pinched nerve in his neck.