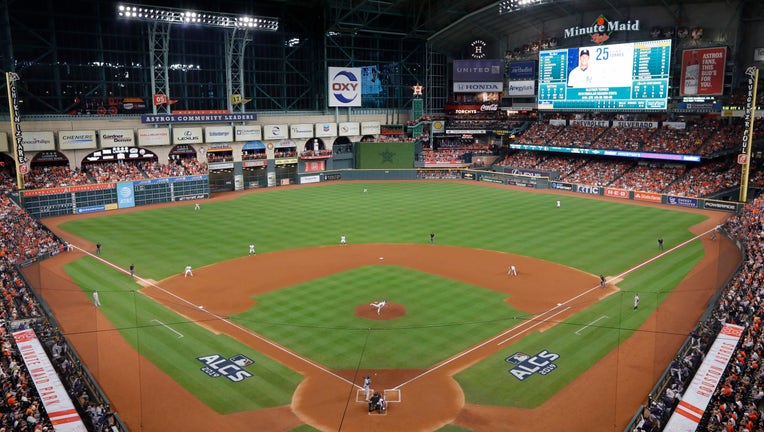 HOUSTON, TX - OCTOBER 13: A general view of action in the first inning of game two of the American League Championship Series between the Houston Astros and the New York Yankees at Minute Maid Park on October 13, 2019 in Houston, Texas. ( Photo by Tim Warner/Getty Images )

HOUSTON (AP) - A man in the Astros dugout who was not in uniform was hit by a foul ball off the bat of Houston's Michael Brantley during Game 2 of the AL Championship Series and exited with a towel over his head.

The Astros released a statement late in Sunday night's game on behalf of Harris County Emergency Corps, which said one of its employees was hit and taken to a hospital, where he was evaluated and in stable condition. The company, which provides paramedic services, provided no other details.

"My thoughts and prayers are with his family and him, and I hope I can talk to him soon," Brantley said after the Astros beat the New York Yankees 3-2 in 11 innings.

Play was briefly halted after the accident in the fifth inning, and Houston manager AJ Hinch came on the field to console a shaken-up Brantley.

Several Astros players were shown in the dugout looking distraught, as were Yankees players who had a view into Houston's dugout. Houston stars Carlos Correa and George Springer both could be seen putting their hands on their heads and then looking away seconds after the ball entered the dugout.

Play resumed after a couple of minutes and Brantley struck out but reached first on a wild pitch by Adam Ottavino.

The Astros extended the protective netting at Minute Maid Park to cover more of the seating area earlier this year, but there is no such protection for the dugouts. The move came after a 2-year-old girl sustained a skull fracture when she struck by a foul ball during a May game in Houston.